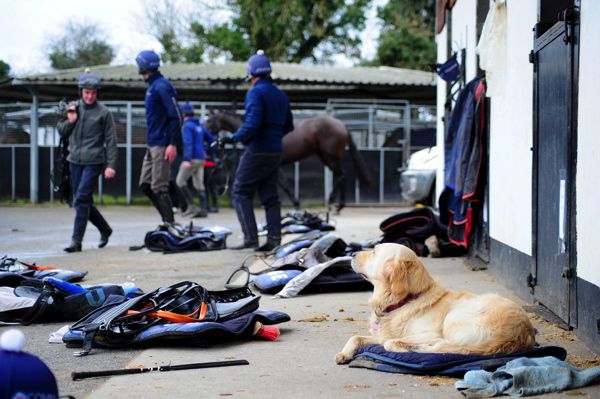 Gordon Elliott opened the gates to his Cullentra House yard near Longtown this morning and revealed a strong team for the upcoming trio of Grade 1 races sponsored by Bar One Racing at Fairyhouse (on December 1) plus the Ladbrokes Troytown Handicap Chase at Navan (November 24).

Detailed below are his thoughts on horses who worked this morning.

“Apple’s Jade will try to go for four in a row in the Hatton’s Grace. She will go for the Lismullen Hurdle on Sunday and then onto Fairyhouse all being well.

“She’s been a star. She had a wind operation last year and her form petered off a bit but she did the same the season before and she is better before Christmas.

“If she can do half of what she did last year before Christmas she’ll do me. She won three Grade 1’s last season.

“You train them from day to day, and I wouldn’t say you could train her that much different. She kept coming into season so you just don’t know.”

“We will run Envoi Allen and probably something else. Abacadabras runs at the weekend and we’ll see how he gets on. All being well Envoi Allen will then go on to Christmas and four or five runs will be enough for the season.

“Abacadabras is a classy horse. He ran some race in the Cheltenham Bumper with Lisa (O’Neill) last season as he was very keen all the way and then he was a bit unlucky in the Champion Bumper at Punchestown.

“He jumped a bit novicey with Jack (Kennedy) at Gowran but Keith (Donoghue) has done a lot of schooling with him since and if he smartens up with his jumping at Navan on Sunday then he’s a smart horse.

“We will definitely run Samcro and maybe one or two others. It was a big relief with Samcro last weekend. Nothing happened last year for us and we couldn’t get him to scope clean. We built a new stable for him and he’s scoping very good now.

“The ground was very quick last year so it might have been a pleasing in disguise that he didn’t go chasing. Don Cossack lost his way for a season and came back and won a Gold Cup. There is no reason this horse can’t come back. Shane (McCann) rides him out most mornings and he’s very happy with him.

“Battleoverdoyen is in the Drinmore as well. I don’t know if we’ll split him and Samcro up. There is a race in Punchestown (Grade 2 Florida Pearl) for him, and he’s a very good horse as well.

“Samcro is a class horse and he could go any trip but Battleoverdoyen is a real stayer — a three-mile chaser.

“Cracking Smart disappointed me a bit the last day. He was working well but he was cowardly enough and backed off all his fences. He had a back operation and it was his first run back so hopefully he’ll do better the next day. We might put some headgear on him.”

“I was very happy with him in Down Royal. He was probably very big last year and wasn’t just finishing out his races. I might keep him to two miles for the moment and didn’t put him in (Hatton’s Grace) at Fairyhouse as he’s only four and you could bottom him out very easy at the start of the season.

“He’ll probably go somewhere at Christmas, either the Grade 1 (at Leopardstown) or the four-year-old hurdle at Limerick.”

“Borice won the Galway Plate and I said straight after that the Troytown is a race I like to win. It’s our local track and I’d say we’ll go straight there with him.

“Ravenhill was second in the Kerry National and the same again we said we’d go there with him as well.

“I thought Roaring Bull ran very well last week against Champagne Classic and he could be one off a nice weight.

“The Big Lense was unseated in the Munster National and is a nice horse. We have 12 in the race and probably whatever gets into the handicap will run. It’s a big pot and a great race to win.”

“Fury Road won very well in Down Royal last weekend. I’d say the step up in trip suited him well. He was a big raw horse last year and always worked very well but he looked good the other day.

“We need to box clever and split some of the good novices up. There is good prizemoney to be won everywhere.”

“Malone Road is just hacking away but we just haven’t got him there yet. Hopefully he’ll be out by Christmas.

“Saint D’Oroux and Aramax are two nice juveniles and, if they are ready, they could go for the Grade 3 Juvenile Hurdle at Fairyhouse.”