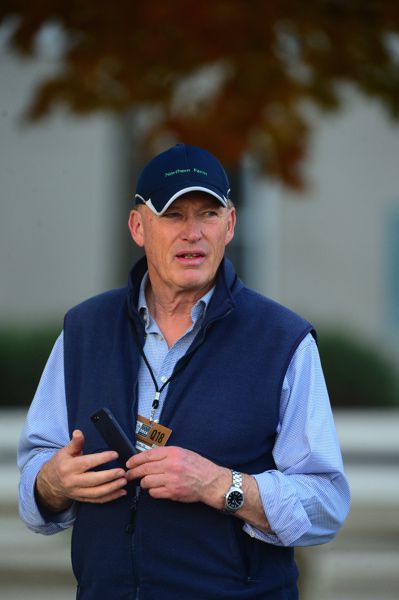 Together the trio enjoyed huge success on the track, most notably with the brilliant racemare Enable, who was retired last October having won 15 of her 19 career starts, with her tally of 11 Group Ones including back-to-back victories in the Prix de l’Arc de Triomphe.

Last summer Enable became the first horse to win a third King George VI And Queen Elizabeth Stakes at Ascot, while her big-race haul also included the Oaks at Epsom, the Irish Oaks, two Yorkshire Oaks’ and the Coral-Eclipse.

Other big-race winners for the Abdullah-Gosden combination include 2019 St Leger hero Logician, the top-class miler Kingman and the popular sprinter Oasis Dream.

Gosden told the PA news agency: “Prince Khalid Abdullah first enjoyed going racing in the 1950s as a young man in Paris. This sparked his bold and thorough plan to establish a breeding operation in the late 1970s, an illustration of his brilliant mind.

“In the period of 20 years, he established himself as both a European and American champion breeder. His charming and humorous manner was coupled with a great strategic approach, both in business and in his horseracing and breeding operation.

“He was a very private and patrician gentleman and a very strong family man, for whom it has been a great honour and privilege to train for 38 years.”

Dettori hailed Abdullah as “a true giant of the sport”.

He said: “He was a great of the sport. I had one of my early Group Ones aboard a horse he owned called Ryafan in the Prix Marcel Boussac, who was trained by John (Gosden).

“He was amazing and a true giant of the sport. You could go on naming all the great horses he has owned, but you would have to say Enable, Frankel and Dancing Brave are the three that stand out.

“Enable will always be the apple of my eye and the last time I saw him was when she won her second Arc.

“He was a real gentleman and he loved his horses. He was very passionate and knowledgeable about them and the results speak for themselves. What he has done for the whole industry is fantastic.

“Though Enable will always stand out to me, Frankel will always be the best horse that I’ve seen and have had to race against.

“I went to see Dancing Brave win the 2000 Guineas in 1986 — I wasn’t riding then and he was incredible. He was then beaten in that famous Derby before winning the King George and the Arc.

“I grew up in an era watching horses like Dancing Brave win and you were always very excited that one day you might get to wear those silks — ones that had been associated with such great success.”

Frankel’s rider Tom Queally believes owner-breeder Khalid Abdullah “leaves a legacy which will live on for a long time” following his death on Tuesday.

Queally rode Abdullah’s unbeaten superstar to each of his 14 successes, which included a remarkable 10 Group One triumphs between 2010 and the end the 2012 season.

Frankel was trained by the late Sir Henry Cecil, with the handler enjoying a long association and many big-race successes with Abdullah.

The owner continued to send Cecil horses when his fortunes dipped in the early 2000s and Queally underlined Abdullah’s “admirable” loyalty to the trainer.

He told the PA news agency: “I was very fortunate and lucky to ride dozens of Pattern race winners for Prince Khalid throughout my career.

“He was a gentleman to ride for, his Juddmonte operation has been a huge success and leaves a legacy which will live on for a long time.

“I was very lucky to ride what was arguably his best horse. It was the work of years and years of breeding to produce a horse with the excellence of Frankel.

“His loyalty to Sir Henry Cecil through all the ups and downs was very admirable. That loyal patronage paid off in the best possible way you could have imagined with Frankel.

“He had a great understanding of horses and was very easy to deal with and very approachable.

“It’s a sad day and my thoughts go out to his family and friends and everyone that worked for him.

“I will look back with great pride that I had some involvement with him.”

Trainer Roger Charlton provided Abdullah with his first of three victories in the Derby at Epsom in 1990, with Quest For Fame striking gold in the hands of Pat Eddery.

Abdullah went on to claim a second win in the premier Classic with the Cecil-trained Commander In Chief three years later before Sir Michael Stoute’s Workforce triumphed in 2010.

“My career would not have happened without him — he’s been unbelievably loyal. I think the whole racing industry, from the breeding side to the racing side, all recognise what an amazingly professional operation Juddmonte has become.

“Prince Khalid has always been at the head of the table, he’s made the decisions and his results are there for everybody to see.

“I’ve known him for over 40 years. He was full of charm, humour and passion for his horses.

“Quest For Fame winning seems a long time ago, but that would be the highlight. I was very lucky to train for him.”

One of the early equine stars for Abdullah was Dancing Brave, who is also widely regarded as one of the greatest horses of all time, having won the 2000 Guineas, the Eclipse and the King George before producing an amazing performance in the Arc.

His trainer, Guy Harwood, said: “I was very fortunate to have enjoyed some wonderful days in Prince Khalid’s early career. In those days he bought horses and he bred them, so I had the best of both worlds.

“I had a lot of success with his really good horses and enjoyed working with him. He was a very fine man.

“We were lucky we had a lot of very good horses together and Prince Khalid took enormous pride in everything he did.”

“It’s a great loss for everyone. Personally he had the sort of charm that made you want to do well for him, though he was a quiet man,” said Fabre.

“I was lucky enough to train a lot of great horses for him. Above all, he was a man that everyone respected and loved. It is bad news.”

Abdullah added Bob Baffert to his roster and the American trainer provided him with Arrogate, winner of the Travers Stakes, Breeders’ Cup Classic, Pegasus World Cup and Dubai World Cup.

“He was definitely one of the titans of racing — a true sportsman,” Baffert told Sky Sports Racing.

“One thing about training for him, he was a gentleman, he was a low-key kind of guy.

“He really trusted his trainers. When I got the word years ago, that Prince Khalid wanted me to buy horses for him as he wanted to try America, it is probably the biggest compliment a trainer in America can get.

“I bought one of the best horses I’ve ever trained for him in Arrogate. As everyone knows not only did he win the Breeders’ Cup and the Travers, but his win in the Dubai World Cup was one of the most exciting races ever.

“He (Abdullah) took care of his people. He was just a really nice man and I just feel fortunate I got to train for him and it was a big boost in my world to say I trained for the Prince.”

Richard Hughes was Abdullah’s retained jockey from 2001 to 2007.

“It’s very sad. It was all about the breeding operation. That was the big thing,” he said.

“He was a good man to deal with. He was a private man, he was very straightforward, it was a very professionally run outfit. I had a great time.

“A few of the top horses I rode would be Oasis Dream, Nebraska Tornado and Three Valleys, who was probably the best winner of the Coventry this century.”

Dermot Weld was another to train a host of good winners for Abdullah and described his death as a “huge loss”.

“I’d like to extend my sympathy firstly to his family and also he is a huge loss to the racing industry, because he was one of the pillars of the bloodstock and breeding industries of the world for the last 50 years,” said Weld.

“He is a man who raced Frankel, Kingman, Enable and he gave us, through his brilliance, these wonderful horses to enjoy.

“Emulous was a very good filly I won the Matron with for him.