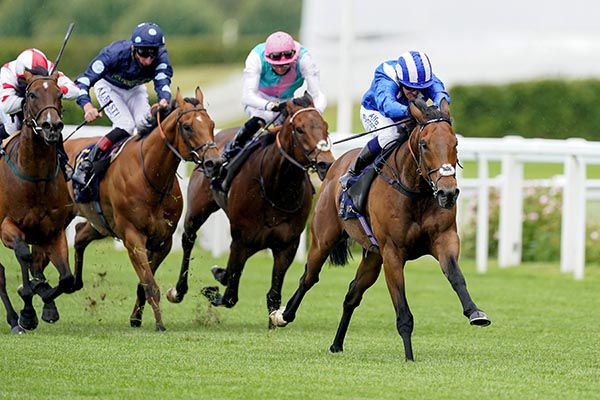 The Goodwood stands were almost empty — but Battaash received a reception fit for a champion following his fourth King George Qatar Stakes success.

On a blazing hot day, the undisputed sprint king delivered victory in the style and manner that has come to be expected of him, with another explosive performance in a race he has made his own in recent seasons.

Many have tried — and failed — to lower the colours of Battaash at the Sussex track, and the outcome was the same again as the 2-7 favourite left his rivals toiling in storming to glory by two and a quarter lengths under his regular partner, Jim Crowley.

While his performance on the track was exceptional, the reaction afterwards was equally as special — with the sounds of cheers and clapping starting the moment he set foot in the parade ring, much to the delight of triumphant trainer Charlie Hills.

Hills said: “I saw Marcus Tregoning’s horse (Mohaather) win the Sussex Stakes and I thought he got a pretty good reception, but that was great.

“He seems to have captured the imagination of the public, as he has been around a long time. He has his little quirks, which is great as you know where you stand with him and I think that has helped capture people’s imagination. I’m just proud to be involved in a horse like him.

“The kids love him and he is just a pet at home. He is not a big, imposing type of horse and you go in there and can cuddle him.

“He loves the attention. It is like having a pony in the yard.”

Having watched fellow six year-olds Stradivarius claim a record fourth Goodwood Cup and Enable an unprecedented third King George VI And Queen Elizabeth Stakes, Hills is thrilled to have a horse the same age still performing at his peak.

He said: “We’re very fortunate to have three six-year-olds like those three — what a generation that was.

“We’ve just seen Stradivarius win here four times, Enable has been kept in training and won the King George three times. It’s great for racing and we’re very fortunate to have a horse carrying on.

“With sprinters you sometimes say when they are six that is their best year. He is fully matured now. Mentally he is fantastic and is in a really good spot.

“Keeping these horses in training at six is what us trainers love to do. Muhaarar and Phoenix Of Spain had to go do another job. He was gelded, but if he wasn’t gelded he probably wouldn’t be here. We are probably all benefiting from him staying in training.”

Though Battaash had a Group One penalty to carry in the race for the first time following his victory in the King’s Stand Stakes at Royal Ascot, the Lambourn handler was confident it would not be an issue judging by his recent work at home.

Hills said: “He has been moving fantastic on the gallops. He has only done two swinging canters since Royal Ascot. Arguably I thought one of them was the best I’ve ever seen him do.

“It’s the first time he had a Group One penalty in the race, that was something a little bit different. We knew if he showed what he did at Royal Ascot he would be very hard to beat on a track that suits him.

“He is pretty straightforward now. He is only in training six months a year then he goes and has his winter holidays at Shadwell. All in all he has been a very well managed horse and that is why we are getting the longevity out of him.

“He is in a great spot at the moment and it would be nice to keep him that way going to York.”

Having conquered all before him at Goodwood once more, Battaash will now attempt to defend his Nunthorpe crown at York, where a host of new rivals will lie in wait — including a clutch of speedy two-year-olds in receipt of lumps of weight from their elders.

However, Hills remains positive his stable star can emerge on top and claim a fourth Group One success.

He said: “You have got these two year-olds that will take him on at York, and Art Power. It is good you have these new horses coming through, that’s as it should be. There has to be some new blood.

“It is a lot of weight he has to give away, but I think experience counts for a lot in a race like that.

“It would be very exciting to go to the Breeders’ Cup at the end of the year, but we’ll have to speak to Sheikh Hamdan and his team.

“We’ll keep going until he tells us he is not what he is today.”