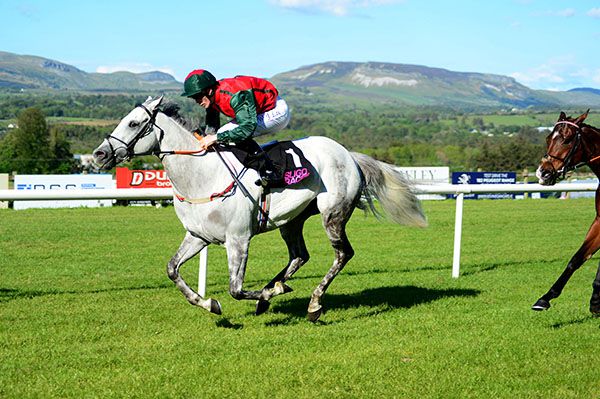 Honor Oak (11/4f) recorded her sixth career success, as she made all in the Kilcawley Construction Handicap.

The likeable Tom Hogan trained grey had been knocking on the door of late, and was last seen finishing third to Geological at Leopardstown on Friday.

Drawn on the rail in stall one, the John Doran owned daughter of Zebedee broke smartly and soon led under Billy Lee.

She was ridden from the furlong pole and kept on well from there to see off the effort of Bay Of Skaill by a length and a quarter.

The runner-up was returned at 6/1 (12s in early shows) under Gary Carroll for Joe Murphy, while Kasbah (13/2) was another three and three parts of a length back in third.

"She did it well. She had a good draw, I was eager to make use of it, and she popped away and travelled well in my hands all the way around," said Lee.

"When I asked her to pick up she put a bit of daylight between them.

"She deserved that as she's been running well this year without success. She had a good run in the Lincoln and a good run at Leopardstown the last day - she's consistent.

"The owners will be delighted. They are not far from here, or Galway either so hopefully she'll be going back there again this year."

* The Stewards enquired into possible interference in the closing stages involving Sors, ridden by A.J. Slattery, placed fifth, Kasbah, ridden by R.P. Cleary, placed third and A Likely Story, ridden by D.E. Sheehy, unplaced, where it appeared both Sors and A Likely Story met with interference. Evidence was heard from the riders concerned. Having viewed the recording of the race and considered the evidence, the Stewards made no alteration to the Judge's placings. They were however, of the opinion that R.P. Cleary was in breach of Rule 214 in that he had ridden carelessly and having considered his record, they suspended him for 2 racedays.