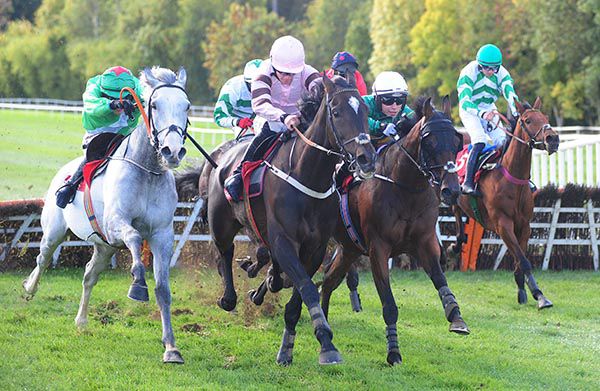 He's bred for the Flat but Teqany hurdles and stays well and Tony Black's charge won his second race since mid-August when just prevailing in the Thomastown Handicap Hurdle at Gowran.

This two miler saw the last hurdle bypassed after Tarazani (fatally injured) and Pass Hymn came down here on the first circuit.

Up the straight then, at the business end, the chasing Clementina was bumped by the loose Pass Hymn.

The Danny Mullins-ridden Teqany meanwhile, survived a steward's enquiry before being confirmed the nose victor over Reaver.

"It was a close call and he could have done with the last hurdle being in there," said the trainer's son Richard.

"He loves jumping. The ground made the difference and the tongue-tie (first time) probably did no harm either.

A.E. Lynch, rider of Clementina (FR), trained by A.J.Martin, reported to the Stewards' Secretaries that his mount was hit by a loose horse in the closing stages.

S.J. Gray, rider of Sillogue Pio, trained by G.A. Kingston, reported to the Stewards' Secretaries that his mount his mount burst a blood vessel.

The Irish Horseracing Regulatory Board Veterinary Officer examined Sillogue Pio, trained by G.A. Kingston, at the request of the Stewards and reported the animal to have blood at the nose following exercised induced pulmonary haemorrhage.

Chacun Pour Soi back in action in Hilly Way

Andy Dufresne made it two from two over fences when landing the Grade 3 novice chase at Navan.

Patrick Mullins is relishing the opportunity to partner Min for the first time in his bid for a record third victory in the John Durkan Memorial Punchestown Chase.

Conflated ran away with Navan's beginners' chase in a race where very few horses threatened.