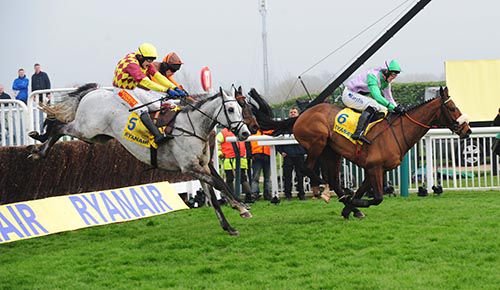 Dynaste (grey)
© Photo Healy Racing
Dynaste will not defend his crown in the Ryanair Chase at Cheltenham next month after being ruled out for the season.

David Pipe's nine-year-old beat Hidden Cyclone at the Festival last year and was being prepared for a return to Prestbury Park, having most recently finished third to Many Clouds in the BetBright Cup Chase at the Cotswolds venue, after which he returned sore.

His jockey Tom Scudamore said: "David rang me this morning to tell me he would miss Cheltenham and it's obviously a big blow.

"It's very disappointing and he'll leave a big hole as far as our Cheltenham is concerned, that's for sure, but we're thankful for what he did for us last season and hopefully he'll be back better than ever."

Prior to his run behind Hennessy hero Many Clouds, Pipe's charge had been a fine second to Gold Cup favourite Silviniaco Conti in the William Hill King George VI Chase at Kempton on Boxing Day.

Following the defection of Dynaste, Betfred make Gordon Elliott's Don Cossack the 4-1 favourite for the Ryanair.

Nickajack Cave to head down under

Nickajack Cave has run his last race for Ger Lyons and will join Peter Moody in Australia with the Melbourne Cup as his target.

Phoenix Thoroughbreds are to withdraw from racing in the UK with immediate effect.

Franconia will head to France this weekend for the Prix Minerve at Deauville.

Owen Burrows is leaning towards pitching Tabdeed into Group One company for the first time in his career in the Betfair Sprint Cup at Haydock.