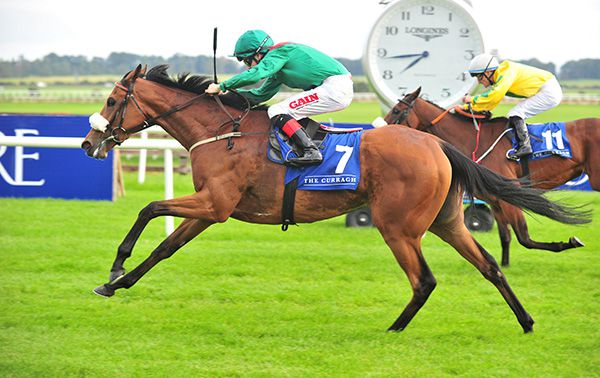 Halfway down the home straight in the Irish EBF Supporting ICW Fillies’ Handicap it looked as if a major shock might have been on the cards as the front-running Effernock Fizz (33/1, as big as 100/1 in the offices) was still clear and galloping on strongly.

However, as we’ve seen many times this season, young Andy Slattery on Kastasa (5/2 fav) had judged things nicely and he brought Dermot Weld’s filly through in the final furlong to master the leader by three quarters of a length.

Hayyel (7/1), behind the winner in Sligo on her previous start, was beaten a little further here in third, a further three and three quarter lengths away.

Most of the others in the line-up were never able to land a blow as the victorious Rock Of Gibraltar filly ( a second on the card for the Aga Khan) made it three wins from her last four starts.

“We were very happy with her, she's progressive,” said assistant trainer Kris Weld.

“She won well in Sligo the last day and this was a step up in grade again and she's won nicely going to the line.

“Where she goes from here I'm not entirely sure but she's a filly that deserves a crack at a decent handicap now in the autumn. We'll see how she comes out of the race and see how we go then.

“She stays well, is honest, genuine, tough and only does what she has to do. She's a lovely filly and hopefully there is more to come from her.”