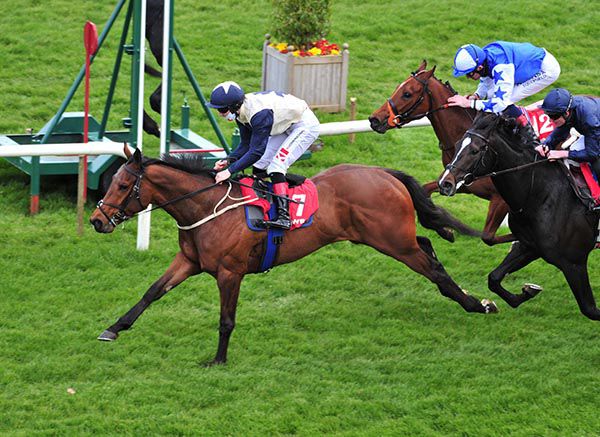 Colin Keane and Ger Lyons teamed up to take the opener at Gowran this afternoon when Lust claimed the seven-furlong maiden.

The champion jockey got his mount across from a wide stall and soon tracked the leaders in the three-year-old contest.

He sent the Fastnet Rock gelding up to challenge early in the straight and the 13/2 shot hit the lead over a furlong from home.

The Newtown Anner Stud-owned gelding always looked like scoring from there and held the late charge of Handel by three-parts-of-a-length.

Lust was last seen finishing sixth at the Galway festival in July last year having been third at Navan on his previous outing.

Shane Lyons said afterwards:- “He’s a genuine horse that is after progressing from two to three. He has a nice pedigree, likes that ground and will get a bit further.

“He was gelded after his last run and we left him out to grow through the winter which is what he’s done.

“Colin said he was a bit slow away but it was his first time away this spring so hopefully he will improve from it. We’ve got the maiden out of the way and we’ll see where we go with him now.”

There was drama turning for home as Miss Maggie May clipped heels and unshipped Siobhan Rutledge. Thankfully the rider walked away unscathed.