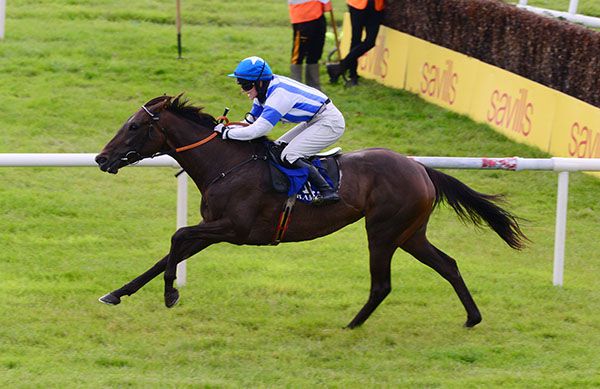 Goodbye Someday won the feature for the Dungarvan handler earlier under Eoin Walsh.

Walsh’s fellow Corkonian, Maxine O’Sullivan, was entrusted with the spin on unlucky Galway loser, Penny Out, and the Cheltenham festival winning rider was beaming after crossing the line five and a half lengths in front.

Odds-on favourite My Sister Sarah chased in vain from out of the dip, but the turn of foot produced by Penny Out in the final quarter mile soon had the race in the bag.

Kiely’s nephew and assistant trainer Tom said: “She has been unlucky. She was unlucky in Limerick in a maiden and then very unlucky at Galway.

“She is a hell of a mare, it's nearly a case of every day she runs she is in the money.

“Maxine gave her a super ride, she got on super with her. She relaxed and settled and they went a nice gallop and that helped her.

“The two miles today helped and it was the plan to come here with no stalls as she can be sluggish out of them.

“She is in again on Saturday here and Maxine said she didn't have a hard race today. Whether she runs or not I don't know.

“She is entered in the Tourist Attraction Hurdle at Killarney next week too but there is some very good ones in that and she would be wrong at the weights with them.

“It's super and my wife Anita bred her as well."

The Stewards received a report from the Clerk of the Scales, Mr. P. L. Malone, regarding the failure of Ms G. O'Donnell, rider of Rightplacerightime, placed sixth, to weigh in after this race.

Evidence was heard from the rider concerned who accepted that this was the case.

Gotthenod provided Dot Love with a second success in as many days, as she ran out a comfortable winner of the FitzpatrickPromotions.ie Mares Handicap Hurdle .