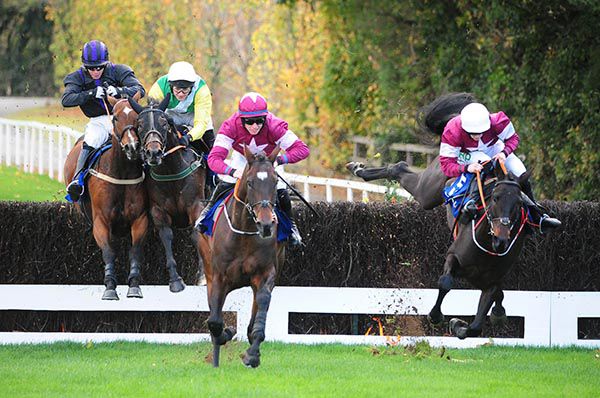 Kildorrery and Michael Stenson served up a 10/1 surprise in the beginners' chase at Punchestown.

The five-year-old gelding raced just behind the leaders in third coming to the second-last where odds-on-favourite Trainwreck (in a close second) unseated Rachael Blackmore.

Duca De Thaix led and was ridden going to the last but he was headed at that obstacle by Kildorrery who nearly sent Stenson out the side door jumping it.

However, he sat tight and the pair kept on well to open up by three and three quarter lengths at the finish.

The nicely-backed Duca De Thaix (2/1 to 6/4) had to settled for second under Jack Kennedy.

Trainer Ted Walsh said: “If he just would behave himself before a race he’d be grand. You have to give lengths away at the start but if you rode him over the first couple of fences he might run himself out.

“He likes the ground and he jumps and has plenty of pace.

“He’s won his novice so he’ll come back here for the (Grade 2) Craddockstown next month (November 18). He’s a bad traveller and kicked down the box when we were taking him to Tipperary last week, so we had to turn around and come home with him.

“Naas, Punchestown, Fairyhouse and Leopardstown is about as far as you could travel with him!”