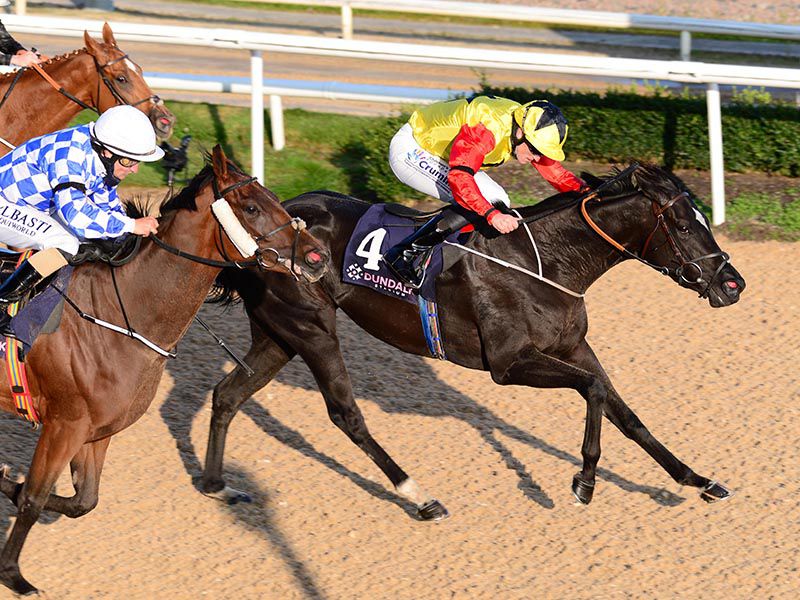 Helen De Pourtales (Billy Lee) beats Time And Money (Shane Foley)
© Photo Healy Racing
Andrew Kinirons has made a lightning start with a training licence in his own name and Helen De Pourtales (13/2) gave him a second success in the Irishinjuredjockeys.com Handicap (Div I) at Dundalk.

Previously an integral part of the Madeline Tylicki operation, Kinirons began in his own right with Fiadhna in a mares maiden hurdle at Sligo on August 5th.

She’d been off for 189 days so this was an excellent effort on the part of the successful Footstepsinthesand filly.

In his first handicap Time And Money put in a most creditable display too, with cheek-pieces on for the initial occasion. He finished off well from the back of the field.

“She had a real good run in a handicap (in March) and then didn’t run again between the Covid and she grew again. She’s a filly only coming into herself," said Kinirons.

“Bill was delighted with her and she handled the surface. She’s going to be a fun mare and she’ll stay a bit further as well.

“Her work was always good and we thought she was good enough to win a maiden last year but through immaturity and a few things it didn’t happen.

“She also got loose here one night and it knocked her confidence a bit.

“I think she’ll be a nice filly on grass as well. We might try her on good ground and then come here for the winter.”

R.P. Whelan, rider of Sienna Lady trained by M.Halford, reported to the Clerk of Scales that his mount never travelled during this race.

The Irish Horseracing Regulatory Board Veterinary Officer examined Dromod Lad, trained by Edward P.Harty, at the request of the Stewards and reported the animal to be blowing hard post race.