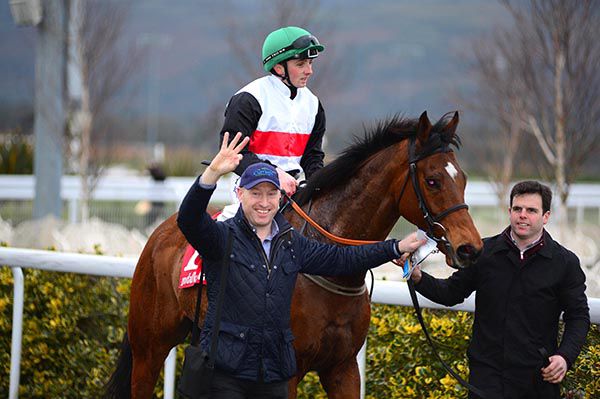 The Pat Murphy-trained Koybig stormed home to complete his hat-trick at Dundalk in the first division of the mile handicap this afternoon.

Complicit looked to have things under control when kicking a few lengths clear with a furlong and a half to run.

Chris Hayes got a good tune from the well backed Koybig (9/10f from 2/1 this morning) and he collared his rival inside the last 100 yards to secure a length victory.

Koybig had won at the track last Friday having also scored over course and distance last month.

Winning owner Derek Leonard said afterwards:- “Hopefully the handicapper won’t be too hard on him, and he could come back here just before Christmas. It would be great to get four in a row!

“It’s all down to Pat Murphy. He’s one hell of a trainer with great staff and he doesn’t over gallop them.

“I met Pat in the spa of a hotel in Killarney. I told him if I got a horse that I’d give him a ring so I got a couple of horses and it was the best phone call I ever made.

“I also have Hit The Silk who I got out of a claimer at Bellewstown in August, and he won next time out by three lengths at Limerick.”