Lobo Rojo too hot for the opposition 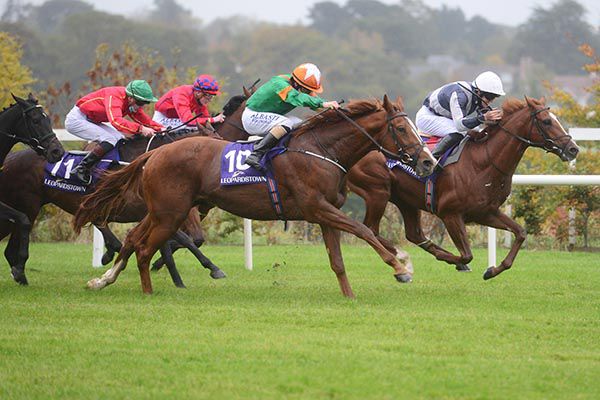 Lobo Rojo put in a power-packed finish to swoop in the Leopardstown Members Club Maiden over 10 furlongs.

Shane Foley's mount made good headway coming to the final furlong and improved to fifth passing that marker.

From there he ran on strongly to cut down Vermilion Cliffs in the final strides.

Jessica Harrington said of the three-year-old colt: “We thought he was very good in the spring and he was just beaten on his first run. Then everything went wrong in Gowran where he hit his head in the stalls.

“He started growing and only in the last month have we started to get him right. He did it well and Shane just rode him with hands and heels.

“He’s a gorgeous, big horse and wants a mile and a half. He has a massive stride and needs a big galloping track.

“It would be good for him to have another run this year but I don’t know what we will find. He’ll stay in training next year.”

The Stewards enquired into an incident in the straight involving Lord Park, ridden by A.J. Farragher, and Yankee Stadium, ridden by J.A. Heffernan, where it appeared Yankee Stadium had his ground taken. Evidence was heard from the riders concerned. Having viewed the recording of the race and considered the evidence, the Stewards found A.J. Farragher in breach of Rule 214(careless) and having taken his record into account suspended him for five race days.