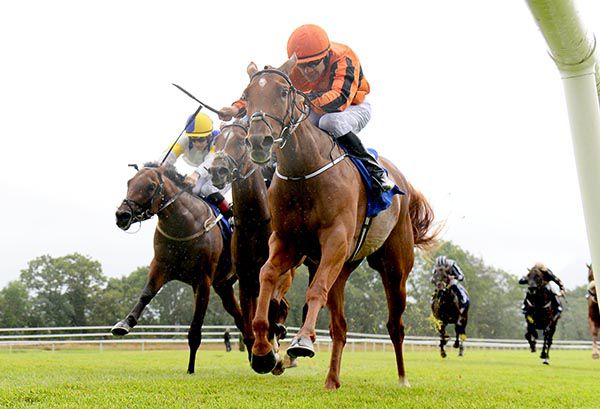 The 11/2 chance (from 7’s on track) was also a welcome winner for Limerick trainer Richard O’Brien, with the Teofilo filly making most of the running under Robbie Colgan.

She kept on well inside the final furlong to beat Justina by three quarters of a length, with Marchons Ensemble a further half a length away in third.

O’Brien said, “Robbie was brilliant on her as he kept it simple and went a nice even gallop. She was good and tough but he said she was very green although when they came to her she found plenty.

“Her two good runs entitled her to run nicely here. She got put on her head by a good filly the last day in Tipperary and this was a totally different kettle of fish.

“She has entries in the Debutante and the Moyglare but it doesn’t look like she wants dropping back to seven furlongs.

“We might focus now on next year as she’s bred to get a mile and a half. She is out of a Shamardal mare and there is a little bit of fizz coming into her so she might just benefit from going easy with her for three weeks now.

“I’m delighted for the syndicate which is headed up by Victor Sheehan from Camp and they are all based locally. They will get a deadly kick out of the fact that it’s Killarney.”