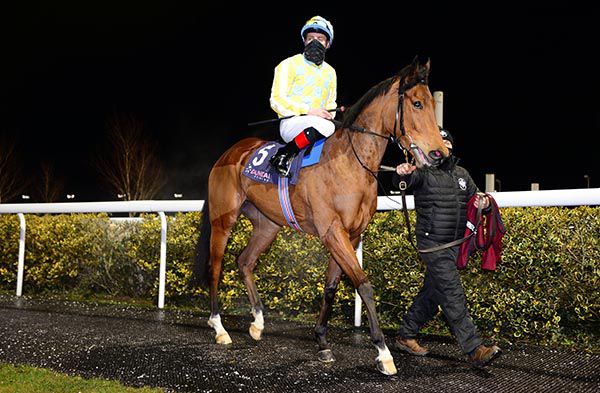 Half-an-hour on from his one two with Visualisation (Shane Crosse) and Devil’s Outlaw (Declan McDonogh), here the former champion jockey, who turned 41 yesterday, was the man across the line in first.

Fourth at Leopardstown in July, Lovely Esteem (2/5 favourite) made light of her absence from action to defeat Thrumps Dream by two and a half lengths.

Pretty Gorgeous of course took the Group One Fillies’ Mile for Oxley and O’Brien at Newmarket in October.

“On her first run she had the form for it. I know Ado (McGuinness) liked the second.

“She stuck at it well and she wants a mile plus. Her first run was good and you'd like to think she'll come on again from this. Hopefully she has a nice future.”

At the request of the Stewards, T.E. Whelan, rider of Miss March, trained by Joseph Patrick O'Brien, reported to the Stewards' Secretaries that his mount was hemmed in on the rail and then in the straight the horses in front of him rolled around alot.

Holland and Kieren Fallon team up in training venture

Darryll Holland has taken out a licence to train from Harraton Court Stables in Newmarket, where he will be assisted by former champion jockey Kieren Fallon.