Make A Challenge does just that in Headquarters 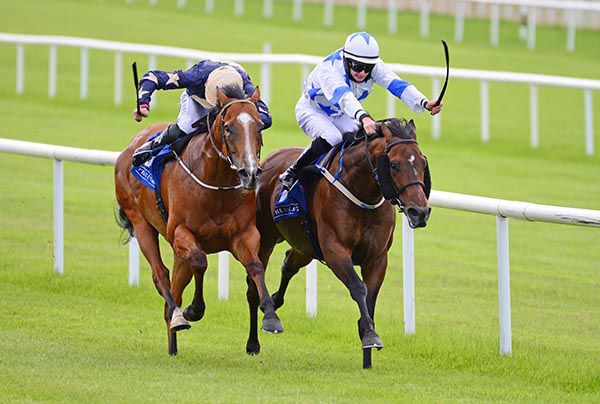 Make A Challenge, right, gets the better of Urban Beat
© Photo Healy Racing

Make A Challenge really knuckled down to his task to battle past Urban Beat in the Listed Midsummer Sprint Stakes over five and a half furlongs at the Curragh.

Urban Beat traded as short as 1.01 on the exchanges when he got to the front in the final 200 yards between Make A Challenge and Buffer Zone.

If anything he had increased the lead slightly with 150 yards left, but Make A Challenge was ridden by Joe Doyle and picked up the chase.

He surged home along the rail and got the better of Urban Beat close home to win by a neck at 5/2. Urban Beat was a 7/2 chance.

Buffer Zone, the 6/4 favourite, couldn't match the front pair and was a length and a half behind their duel.

Trainer Denis Hogan said: “It was good to see him back. The last day was a bit of a mess. A few times we rode him too forward over six including Champions Day at Ascot last year.

“It was very easy to say that Joe was there too soon but he doesn’t like to be held up. It was more me than Joe last time as I decided to change it up.

“I left it to Joe today and he told me he’d get it right. To be fair he had to battle and he did. I thought he was beat but he stuck the head down.

“There is a fair chance he’ll be supplemented for the Sapphire here next weekend. It’s 8,000 but he’s paid for it today.

“The long-term target is the Prix de l’Abbaye and we’re hoping for soft ground there. There is the Flying Five here (at the Curragh) and a lot of options in the UK.

“Joe rides him every day at home and he does a great job with him as he can be a hard ride at home. He knows him better than anyone and it was his tactics that worked out there.”

On Sceptical in the July Cup at Newmarket tomorrow, he said: “I’m hoping the ground dries out a bit for tomorrow at Newmarket. It’s dead enough looking today but Frankie (Dettori) tells me it can dry very fast.”

Make A Challenge is now four from six at Headquarters.