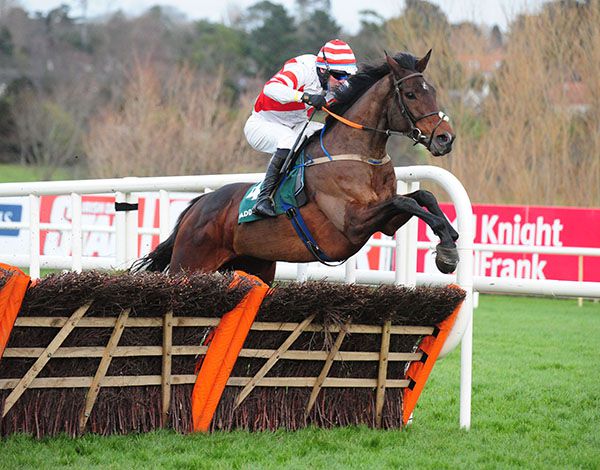 Master McShee (5/1) won the Paddy Power ‘Maybe I Like The Misery’ Handicap Hurdle in the hands of Ian Power.

Runner-up to earlier Grade 1 winner Appreciate It on his hurdling debut at Cork in November before going one better at the same track, on paper it looked like the Malinas gelding could be in off a nice mark and so it proved as Power tracked the leaders on his mount before hitting the front early in the home straight.

He had a handy advantage racing to the last and got over it safely before accounting for the staying-on Sea Ducor (7/1) by five lengths. The Moyglass Flyer (7/1) and Gold Speed (33/1) completed the placings with the 10/3 favourite Winner Takes Itall finishing in mid-division.

Winning owner/trainer Paddy Corkery, based in Cappoquin, Co.Waterford, said: “It’s brilliant to be able to bring a horse here with a chance and to win is unreal.

“Ian (Power) has given him a peach of a ride each day he’s rode him. He’s a horse with a lot of ability.

“He’s not for sale. I’ll probably never again have a horse like him and I’m delighted to hold onto him.

“He got a cut on his leg as a foal and he had a lot of problems. I like hardship and I bought him but didn’t pay a fortune for him. We solved the problems.

“I wouldn’t rule out going to Cheltenham this year but it’s not the be all and end all this year. If he’s still in one piece next year he’ll probably be a better horse over fences and we might go.

“My son John is the stable boy and my wife Deirdre owns him.”