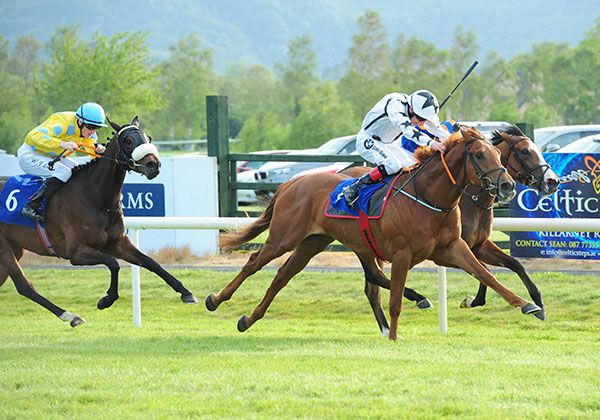 This mile contest boiled down to a match between Aidan O'Brien's Carefully and Gordon Elliott's Pensylvania Avenue at the furlong pole.

It was Pensylvania Avenue who came home best as she held onto a narrow advantage picked up inside the final furlong.

The 2/1 favourite won by a head from Carefully at 7/1. Seamie Heffernan put up 1lb overweight on the runner-up.

Declan McDonogh said: “I was in behind following Seamie and I thought I might get into a pocket down the straight, so I got him out early from the pocket at the top of the straight to get a clear shot at him, but then I had to drop the revs on him a little bit and maybe got there a shade early on him and he was parking up a little bit.

“He's a grand horse and I'd say he's only doing what he has to. I'd say he might get ten furlongs.

“The winner in Cork, Isotope, is probably not a bad horse. This horse is a nice horse and we always liked him. He's probably only growing into his frame now, he's a huge big horse.

“Hopefully he'll step forward and win another one of those. I think he's only learning to relax in his races and he will get ten furlongs.

“He had the right man training him — I hope he gets more Flat horses!”

The Stewards interviewed J.A. Heffernan, rider of Carefully (USA), concerning his use of the whip in the latter stages of this race. Evidence was heard from the rider concerned. Having viewed a recording of the race and considered the evidence the Stewards accepted that the riders use of the whip in the forehand once down the shoulder was used for corrective purposes. However, they were of the opinion that J.A. Heffernan was in breach of R10(3)(g) by using his whip with excessive frequency and R10(3)(i) by failing to allow his mount three strides to respond to the whip. Having taken his previous record into consideration, the Stewards suspended J.A. Heffernan for one race day.