Mitchouka in rattling good form as he heads for Fred Winter 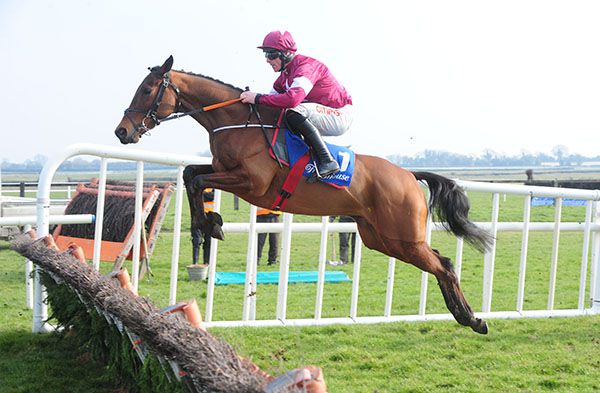 It was smooth from 4/9 shot Mitchouka in the Grade 3 Winning Fair Juvenile Hurdle at Fairyhouse.

Now a three time course and distance winner here, the Gigginstown House Stud-owned and Gordon Elliott-trained Mitchouka took over two out from Mastermind.

Davy Russell (100th winner of the season) was able to let the Creachadoir gelding come home at his ease then, by two and a quarter lengths from his aforementioned rival.

"He's a grand horse and he keeps winning in fairness to him," said Elliott.

"I keep knocking him, saying he is what he is, but he's after winning three or four races and if we had a few more like him we'd be alright.

"He'll go for the Fred Winter now all being well. He'll get to the last on the bridle but I don't know if he'll get up the hill, that would be the worry."

D.N. Russell, rider of Mitchouka (FR) trained by Gordon Elliott, reported to the Clerk of Scales that his mount pulled a shoe.