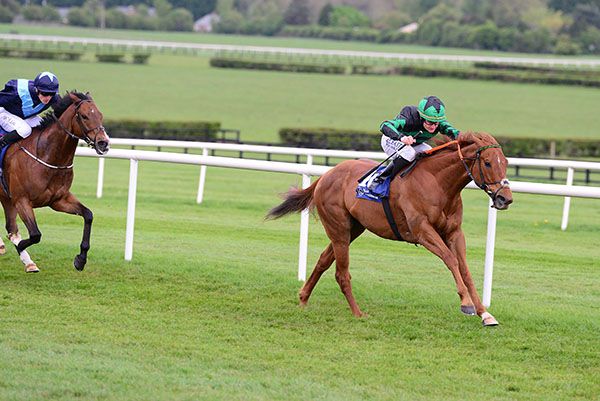 Mokhalad is ridden out by Shane Foley
© Photo Healy Racing

It's not often you see a horse go off at 11/8 (6s in early shows and from 11/4 on-course) for a six-furlong twenty-two runner handicap, but such was the confidence behind the Galaxy Horse Racing Syndicate owned gelding.

Already successful over the course and distance earlier this month, the chestnut was second at Tipperary on Thursday, and was settled behind the leaders this evening.

He was pushed along and got the front a furlong and a half from home, stretching clear inside the final 200 yards, going on to score by two and a quarter lengths under Shane Foley.

Aleef (25/1) filled the runner-up spot on what was just his second start for Ken Condon, while the ten-year-old Enter The Red (16/1) was a further length back in third.

The well-backed Sharp Defence (20s this morning and from 14s to 8s on-course) completed the places in fourth.

"That was impressive. The run the last day was very good, considering it's a very quick five in Tipperary," said English.

"He came out of it grand so we said we'd let him take his chance.

"Shane was saying that he appreciates that little give in the ground. We might just give him a little break now, a couple of weeks off, and have a look at what is coming up later in the summer.

"Six is his trip, he does get seven so we have options, but he just needs a little bit of give in the ground and good to yielding is ideal.

"We'll wait and see what the weathers does and pick something out again. We'd hope to get to a premier handicap at some stages along the line.

"If he could do that at the Curragh in one of the big handicaps we'd be laughing."