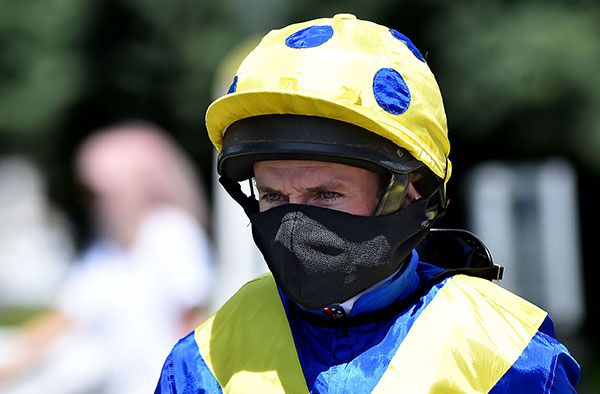 Having hit the frame in both starts as a two-year-old, the Sir Micheal Stoute-trained son of New Approach hit the target on his third start with an impressive display in the mile prize.

Overcoming the widest draw of all in stall 12, the 11-8 favourite quickly got to the front before moving through the gears late on to pass the post seven lengths clear of Defence Girl.

Moore said of the 11-8 scorer: “Maybe the race fell apart a little bit with Hugo’s (Palmer) horse (Imrahor) being pulled out and it was a bit of a mess down at the start, but it is good to get him started.

“He is a very straightforward colt and hopefully he will do well. It was just how the race unfolded being out in front. I suspect we will see him over further at some point.”

Frankie Dettori was straight back to business as well as he steered Galsworthy to victory at Kempton on his first ride following the resumption of racing.

Dettori did not travel to Newcastle on Monday for the opening day, opting to ease into action with one ride at the Sunbury venue on Tuesday.

His fans did not miss the hint and the John Gosden-trained Galsworthy was sent off the 4-5 favourite for the Unibet Casino Deposit £10 Get £40 Bonus Maiden Stakes.

Settled in second in the early stages, Galsworthy kicked four lengths clear in the straight, leaving the jubilant Dettori to celebrate just to the television cameras as racing is currently being staged behind closed doors.

He said: “We went a bit slow. He is a horse with more experience and I asked him at the two and he quickened really well. This surface gets really tiring so he was a little bit lethargic. I would like to see him on grass, but we got a race into him and hopefully it is upwards now.

“He is very laid back. There was a lot of first time out horses in the race and he did everything I asked him to and I suspect he will improve again on fitness. He ran well and we will try again.

“He has run twice and that counts for a lot. He is a big horse, but he probably needed this race to get him to better things.”

Commenting on having his first ride back, Dettori joked on Racing TV: “It’s good — I’m away from home.

“I think my wife is more pleased than me, I’ll be honest with you.”

While racing’s return has been relatively low-key in terms of class so far, it kicks up a gear on Wednesday with the Classic Trial at Kempton, while Thursday also sees the four-day Qipco Guineas Festival begin at Newmarket.

Dettori is set to renew his partnership with top stayer Stradivarius in Friday’s Hurworth Bloodstock Coronation Cup, before taking Classic mounts on Saturday and Sunday and the ever-popular Italian is relishing the pace of the rejigged calendar.

He said: “It is great when you think about it. In two days’ time I have Stradivarius and then the 2000 Guineas and 1000 Guineas, then two weeks today we have Royal Ascot.

“It’s all happening now. We usually have a stop-start season, but now it is full on.

“I hated it (the break from racing) like everybody else. We are the first to start. At the moment I’ve seen everything running smoothly and long may that continue.

“It is the start of sport — we are a non-contact sport and it’s great we are able to start.”

With travel restrictions meaning riders will not be coming over from Ireland for the Guineas meeting, Dettori has picked up a spare ride for Aidan O’Brien in the 2000 Guineas — although he is not quite sure which colt he will be riding.

He added: “Whatever Ryan (Moore) doesn’t ride I will be on, but that is still to be decided. I ride John’s in the 1000 now, Shimmering.

“I was on Raffle Prize. We didn’t think Shimmering would get in with her low rating, but they didn’t fill the race up and she is running.”