Much to look forward to for Meade in the coming weeks 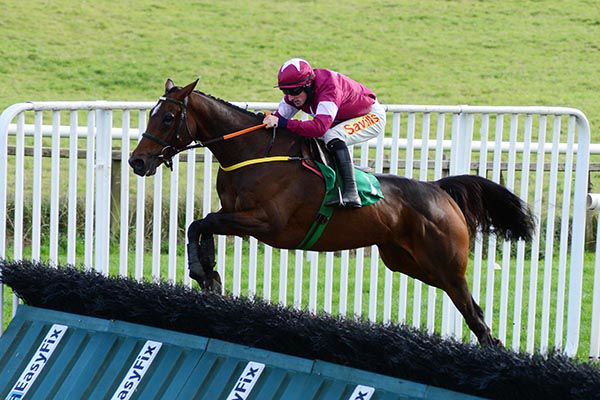 Noel Meade is keen to have a crack at next month’s Bar One Racing Hatton’s Grace Hurdle at Fairyhouse with his improving youngster Beacon Edge.

Denied a run at any of the spring festivals because of the pandemic, Beacon Edge has returned to action early this season and already has two wins on the board.

The most recent came in Grade Three company at Galway from two well-regarded types, and Meade feels he has earned a step up in class on November 29.

“I’m keen on the Hatton’s Grace — because it was either that or the Lismullen, but I think the Lismullen comes up just a little quick,” said Meade.

“Running in the Hatton’s Grace will also give us a chance to find out exactly where we are.

“I’ve always thought a lot of this horse. He’d won a bumper for Nicky Richards at Ayr, and then Eddie (O’Leary, Gigginstown Stud racing manager) bought him from the Cheltenham sale for me.

“We ran him in two winners’ bumpers in Leopardstown and Punchestown but we probably didn’t make enough use of him, he stayed on well.”

“Of course Liverpool and Punchestown were then off. He did have two runs at home — he was beaten a nose at Naas and a neck at Navan, but they were over two miles, and he wants further.

“I think he’s done well over the summer and he was impressive at Galway the other day — but I don’t know what he beat.”

Another youngster in the Gigginstown colours Meade has high hopes for is Diol Ker, who had some classy hurdles form to his name but fell on his recent chasing debut.

He said: “Diol Ker is ok. (Jockey) Sean (Flanagan) felt he was just too fresh.

“He’d been jumping very well at home. He’s a nice horse — he beat Willie’s who won the three-miler at Cheltenham (Monkfish) on his only run last season and then had a small setback.

“I’ve always thought jumping fences would suit him better, but that was a bad way to start. Because of covid, you can’t take them to a track to school — which is a shame.

“He wants a trip. I’d be hoping he’ll be running in the three-miler at Cheltenham by the end of the season.”

This year’s Ladbrokes Troytown Chase at Navan comes a little earlier in the season than normal, but it is a race Meade tries to target, and he has won it twice with Heist and Tout Est Permis.

He has three entries this year in Cap York, Brace Yourself and Valdieu.

“I’m chairman at Navan, so that’s one reason I love to have winners there, but I am only six or seven miles away,” he said.

“We’ve been lucky enough to win it a couple of times.

“We’ve three entered, but the most likely runner is probably Brace Yourself. I think three miles will be right up his alley, and his run at Galway won’t have done him any harm.”

Of course, entries for races like the Troytown these days are dominated by Willie Mullins and Gordon Elliott — and while Meade counts them both as friends, he admits the days of him adding to his seven champion trainer titles look over for the foreseeable future.

“It’s extremely difficult, but I’ve always said training horses isn’t the most difficult part of the game — it’s getting the horses,” he said.

“It’s a bit like being a jockey — if you’re winning races you get on better horses. Usually what happens is those who win in the sale win on the track. But you’ve got to be successful on the track to get the people to buy horses.

“I don’t think we’ve ever seen or will see Willie’s like again. He’s done things with horses the great Vincent (O’Brien) would struggle with. He takes them to Japan, Australia, everywhere — phenomenal.

“Gordon has been phenomenal since he started, and I’m lucky enough to call both of them my friends. Gordon has a fantastic brain — he’s very dedicated to winning the championship and races, and Willie is the same. You have to be like that.

“When you are not chasing the championship as hard it’s easier. When you were chasing it, the minute the season was over you wanted to get going again, but it took quite a bit out of you and you don’t enjoy it as much.

“It’s not that I don’t want to win all the time — of course I do — but when you chase the championship it puts an awful lot of pressure on you.”

Horgan puts rivals to the sword on Bluebeard's Castle

The Test Your Tipping Talents At PUNTERS.HOLLYWOODBETS.COM Every Dundalk Meeting Maiden saw the 15/8 favourite Bluebeard’s Castle make all the running in the hands of 7lb claimer Hugh Horgan.

The Crown Plaza Hotel Leading Jockey & Trainer Championship Handicap (Div I) saw the always-prominent Foreign Legion (5/1) come home in front under Ross Coakley who was partnering the well-bred 5-year-old for the first time.

Coogan back amongst the winners with Stop On Red

The Join Us On Instagram @dundalk_stadium Nursery went to the 7/1 chance Stop On Red who raced handily before hitting the front a furlong and a half out.