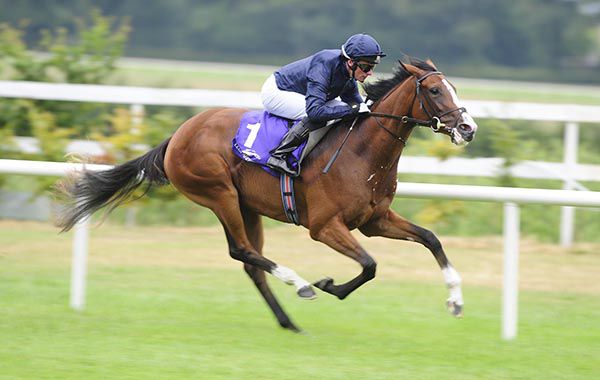 Shakespear’sgalley will bid to make it three wins from his last four starts when he lines-up www.navanracecourse.ie Handicap.

Successful at Killarney and Down Royal last month, the Joseph O’Brien-trained four-year-old is clearly a progressive sort and is sure to have plenty of supporters in this two-mile contest.

Top-weight Kerosin finished ahead of Shakespear’sgalley when they met at the Curragh and it will be interesting to see how he fares with Joey Sheridan taking a valuable 10lb off.

Prospectus, who claimed the Tipperary Cup at Clonmel last month, is another leading hope, while Venezia and Kuiper Belt also appear to have solid claims.

Billy Lee takes the ride on Venezia and he will be aboard Cacique Royale in the Racing Again At Navan July 13th Handicap.

The Andy Oliver-trained gelding won twice last September and finished fourth to Perfect Tapatino on his most recent start at Naas in October.

Onlyhuman has more recent form to his name, winning at Limerick in April, and it will come as little surprise if he manages to follow up now.

Happy Company, who has been knocking on the door of late, and six-times winner Canary Row are others to consider in this mile-and-a-quarter contest.

John Oxx trains Canary Row and he is represented by Brave Display in the ultra-competitive Arkle Bar Handicap.

Ninth of 22 on his return to action over the course and distance last Saturday, an improved performance can be expected from the son of Requinto now.

Takeachancejimmy won that contest here seven days ago and bids to defy top-weight with Robbie Colgan again in the saddle.

Others to consider in this five-furlong sprint are Teddy Boy, Gopsies Daughter, Art Of Unity and Cozy Sky.

The opening Irish Stallion Farms EBF Fillies Maiden is also over the minimum distance, with Tango, who was just denied on debut at the Curragh, the stand-out name here.

Tango is trained by Aidan O’Brien and the master of Ballydoyle saddles United Front and newcomers San Pedro and Royal Lytham in the Irish Stallion Farms EBF (C & G) Maiden.

Just three have been declared for the concluding Irish Stallion Farms EBF Race, with O’Brien represented by Goddess.

An ultra-impressive winner of her maiden at Leopardstown last July, the daughter of Camelot since disappointed on her second start in the Silver Flash Stakes.

The 94-rated bay will be expected to get back on track here, with Invasion Day and Tinandali her two rivals.

“There are only three in it and we’ll probably take our time on her and follow them round.

“I’d be delighted if she runs well and goes on from there.”

Kiss For A Jewel, Simply Beautiful, Nan Yehi and Camphor appear the ones to focus on in the Irish Stallion Farms EBF Fillies Maiden over a mile and two furlongs.