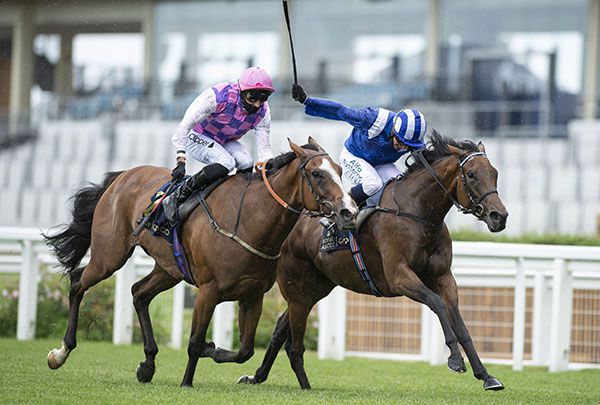 Nazeef, far side
© Photo Healy Racing
Hot favourite Terebellum could finish only third as her stablemate Nazeef stole the show in the Group 1 Tattersalls Falmouth Stakes at Newmarket.

Having gone down narrowly to Circus Maximus in a pulsating renewal of the Queen Anne Stakes at Royal Ascot last month, the John Gosden-trained Terebellum was all the rage to bounce back to winning ways as the 5-6 favourite — and set out to make all the running under Frankie Dettori.

Nazeef had won each of her five starts since finishing third on her July Course debut in June of last year, including a Royal meeting victory in the Duke of Cambridge Stakes. She was a 9-2 shot in the hands of Jim Crowley.

Terebellum still held sway entering the final furlong, but was reeled in by both Nazeef and Billesdon Brook in the closing stages, with the former emerging triumphant by a neck.

Billesdon Brook — winner of the 1000 Guineas in 2018 — ran her best race of the season so far in second, with Terebellum having to make do with minor honours again in a close-up third.

Crowley said: “The only pace in the race really was Frankie’s filly (Terebellum) — she’d won over 10 furlongs and all the others looked like they were going to take a lead. I had a great position in a small field and managed to get a bit of cover.

“She’s as tough as nails and she’s improved with every run. That’s six races in a row she’s won now — she’s climbed her way up the ladder. She’s a really gorgeous looking filly as well, with plenty of size and scope about her.

“She is so versatile and would probably stay a bit further. I actually thought at Ascot she needed every yard of the mile to win and you could argue it was the same today.

“I’m not sure what the plan is — that’s up to connections. If they wanted to stick at a mile with her they could, or if they wanted to step up to 10 furlongs, I think she’d be competitive in a Nassau Stakes or something.

“Wherever she goes, it’s just a pleasure to ride her.”

Gosden admitted to being surprised by the result, with Terebellum seemingly the superior filly on the Newmarket gallops.

“I just don’t think Terebellum ran her race, but she’ll be fine. She seemed to have it won, but she didn’t finish the race off in the way you would have expected her to do,” said the Clarehaven handler.

“The winner is a lovely, brave filly, but I thought Terebellum had it under control. They don’t work together, but from what we know of them, I thought the betting was correct.

“The Prix Rothschild is the obvious place to go with Nazeef. She is quite lazy and doesn’t show you much at home, but she dug deep today and has a great attitude.

“Sheikh Hamdan doesn’t normally keep four-year-old fillies in training. I did get down on two knees to ask him to keep Taghrooda in training at four because I think she would have won everything, but he tends not to believe it! He allowed me to do it with this filly and she has now won a Group One here and a Group Two at Royal Ascot, which is great.”

Richard Hannon was proud of Billesdon Brook’s performance in defeat, saying: “She has run a super race and I’m delighted — she is our most loyal soldier.

“We will keep going with her. There is the Prix Rothschild and lots of other races. She has run a super race and is as hard as nails and one of the most robust mares ever.

“She is a star and her owners are immensely proud, as am I.”