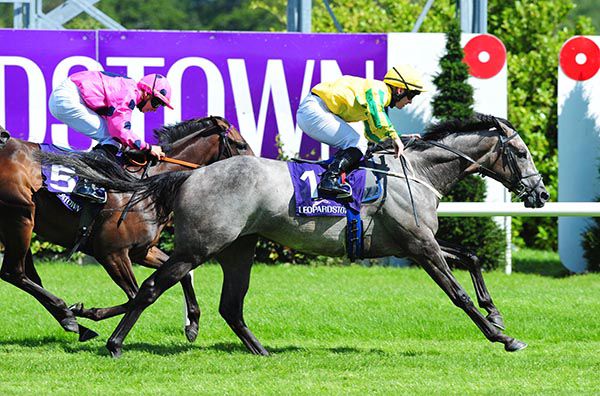 Nickajack Cave continued his progression through the ranks, as he claimed the Group 3 Bahrain International Ballyroan Stakes.

A surprise winner of the Saval Beg in June, the Ger Lyons trained grey was sent off a 15/8 chance this afternoon, with Pondus returned the 11/10 market leader.

Settled behind the leaders on the inner by Gary Carroll, the son of Kendargent was ridden to challenge the front-running Fresnel with a furlong and a half left to race.

He soon edged to the front inside the final furlong and kept on well for pressure in the closing stages, going on to prevail by half a length.

The aforementioned Fresnel (22/1) ran a fine race in second under Ronan Whelan for Jack Davison, while Pondus could only manage a disappointing fourth.

Shane Lyons said afterwards: "He's improving all the time. He's in the Irish St Leger and that will be his ultimate goal.

"We were a little bit worried about the ground beforehand and Gary said he just doesn't want extremes. He would appreciate a bit more juice but got away with that no problem.

"That wasn't a quick race and he's after showing a bit of class with that turn of foot. He's after stepping back a bit in trip from the last day and will improve for the extra trip."