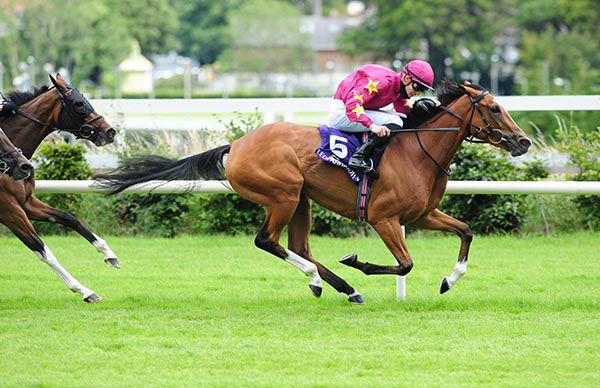 After earlier wins for his brother Donnacha and father Aidan, Joseph O'Brien got in on the act, as his Thundering Nights claimed the Leopardstown Fillies Race.

Successful in a maiden at Galway last October, the Night Of Thunder bay since filled the runner-up spot on her return to action at the Curragh, going down by just a short head to Sonnyboyliston.

Sent off the 11/8 favourite under Shane Crosse, the Shapoor Mistry owned victor raced in second.

She was pushed along to challenge from early in the straight and hit the front with over a furlong left to race, keeping on well from there to register a comfortable length and a half success.

Amma Grace (11/4 to 9/4) finished second under Oisin Orr for Dermot Weld, while Sh Boom was a short head back in third.

O'Brien said afterwards: "She had a good run the last day. She's straight forward and quickened up well. She seemed to be in control most of the way and is progressive.

"We'll try to get some black type with her and she will stay further.

"She won with an ease in Galway so she is versatile in terms of ground."