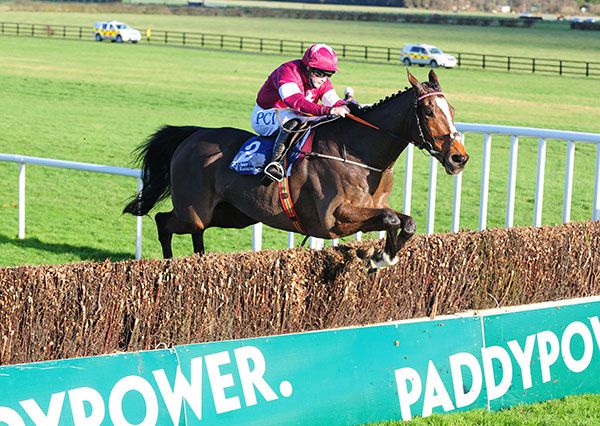 Three of the four runners contested the Arkle Chase at Cheltenham last March, where Fakir D’oudairies fared best in second-place, ahead of disappointing 5/2 favourite Notebook in sixth and Cashback, who fell when beaten at the second last.

The trio were today joined by front-running outsider Djingle and while Cashback was heavily backed in to 11/10 favourite, 'the jolly' fell at the first.

Leader Djingle folded entering the home straight as Notebook took over the lead, and in the end Notebook stayed on strongly for a 12 lengths win over Fakir D’oudairies.

Following today's race De Bromhead stated “he was a little bit rusty over the first few but then jumped really well and stayed at it really well.

“It’s good to see him back to form and I’d say he’ll go to Leopardstown at Christmas. He loves it around there and has won two Grade 1s there.

“Rachael said he took a blow at the fourth last and hopefully he’ll come on for it. I’m delighted with him.”

German-bred-and-named Notebook is owner O'Leary's sole purchase from John Nallen, as he won't advertise the Clonmel hotelier's other 'Minella' prefixed horses, and was later cut by Paddy Power to 20/1 (from 33/1) for the Champion Chase at Cheltenham in March.

Addeybb set for Goodwood ahead of Champions Day

William Haggas is tuning up his two big guns for Champions Day, with Addeybb set to run at Goodwood on Wednesday should conditions allow.

Newbury’s Haynes, Hanson & Clark Conditions Stakes has an illustrious history, with some greats of the Turf on its roll of honour — and this year’s renewal looks sure to throw up a smart winner.