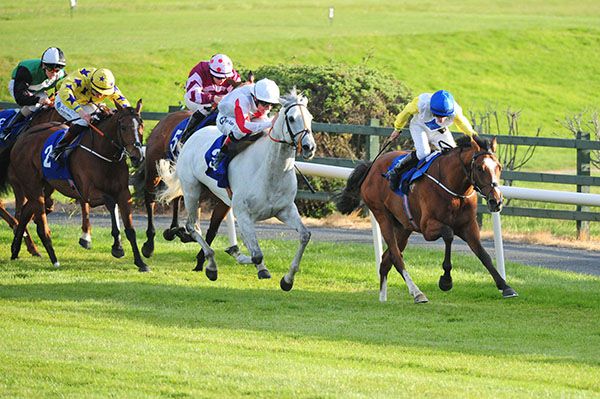 Shakespear'sgalley (8/1) relished a step up in trip for the two mile one furlong handicap in Killarney to bring up Joseph O'Brien's brace.

He shot through a gap a furlong out and stayed on well to win by three quarters of a length with 7lb-claimer Alan Persse in the saddle.

Venezia kept him honest all the way to the line but had to settle for a runner-up berth at 3/1. Jake Peter, the 6/4 favourite, finished out of the placings in third in this seven-runner race.

Alan Persse said: “He needed every bit of it. Thankfully when the gaps came he was there.

“Once he passed one horse he flew home then and stayed going.

“He had a good run in the charity race at Punchestown and we were hopeful he'd come forward from that so thankfully he did. Onwards and upwards with him now.

“Hopefully the handicapper won't kill him and he can pick up another few of those mile-and-six or two mile handicaps.”

This was Shakespear'sgalley's handicap debut.

The Stewards interviewed A.C. Persse, rider of Shakespear'sgalley, concerning his use of the whip in the latter stages of this race. Evidence was heard from the rider concerned. Having viewed a recording of the race and considered the evidence the Stewards were of the opinion that A.C. Persse was in breach of R10(3)(g) by using his whip with excessive frequency. Having taken his previous record into consideration, the Stewards suspended A.C. Persse for one race day.