O'Brien may extend title lead at the Curragh 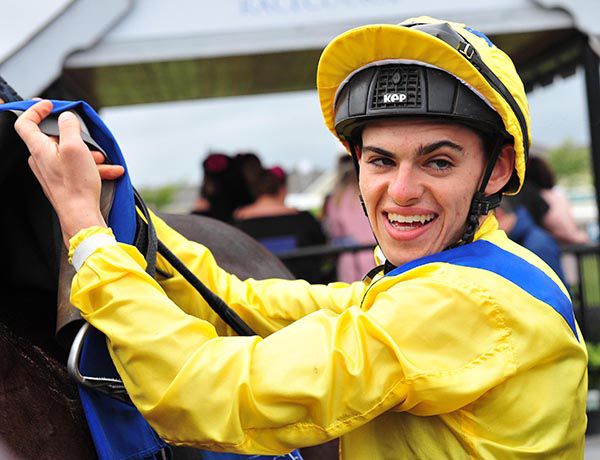 Donnacha O’Brien and Colin Keane renew rivalry in their battle for the 2019 Flat jockeys’ championship at the Curragh this afternoon, and O’Brien may well extend his lead with a number of choice mounts.

The reigning champion holds a lead of four (103-99) over Keane after partnering a double at Naas on Sunday, and he teams up with his brother Joseph for four strong rides on this eight-race card.

Fame And Acclaim made a promising debut here last month and will be a leading fancy for the opening Irish Stallion Farms EBF Maiden, although Keane is aboard an interesting Ger Lyons-trained newcomer in Lough Cutra.

Patrick Sarsfield was beaten at odds-on when making a belated seasonal debut at Gowran Park but looks set to go off at cramped odds again for the O’Brien brothers in the Flat Rath Maiden.

Zoom Zoom Babe got up close home to score at Leopardstown on Saturday and Donnacha now takes over on the top-weight who carries a mandatory 6lb penalty in the Happy Halloween Nursery Handicap.

Blacklooks finished with a flourish to score at Limerick earlier this month and O’Brien will be hoping for something similar in the mile Ivory Handicap, although Keane is on one of the chief threats in top-weight Red Striker.

Keane, who won the Flat jockeys’ title in 2017, also partners the well-fancied Convincer for Lyons in the Curragh Training Grounds Nursery Handicap.