Order Of Australia puts deserved win on the board 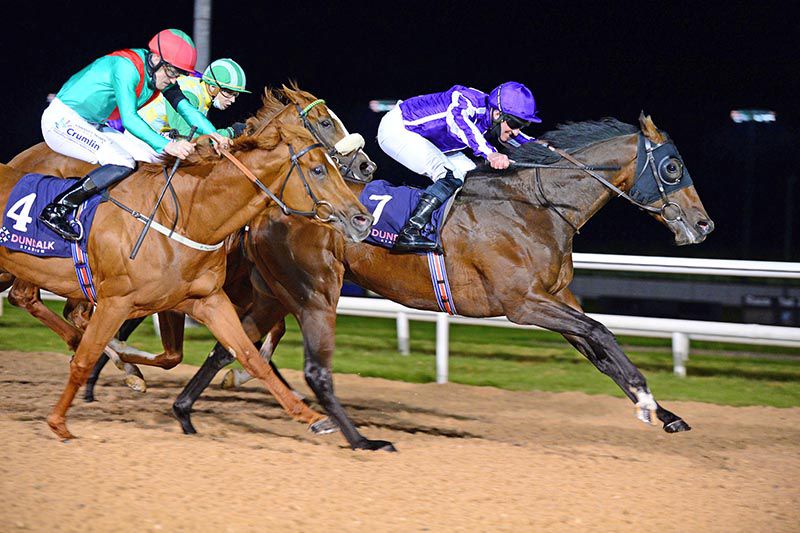 Order Of Australia wins under Seamie Heffernan
© Photo Healy Racing
On his first outing since a Prix du Jockey Club seventh placing at Chantilly on July 5th Order Of Australia justified odds-on favouritism in the Find Us On Instagram @dundalk_stadium Race.

Seamie Heffernan got a 22-day whip ban for his efforts on the Australia colt then, and the Irish Derby fourth shed his maiden tag under the same rider here.

A half-brother to multiple Group One winner, Iridessa, Ballydoyle's 10/11 shot was game to fend off a host of challengers from over a furlong out.

Second favourite Bolivar did best of the rest, three parts of a length adrift in second.

An emotional Seamie Heffernan said, “He didn’t have much chance of winning races before as he was competing right at the top level because that’s the way he was working.

“He’s had a little break since and I won snug. I would have been disappointed if he’d been beaten.

“I was waiting for Pat Smullen to come and get me. I wish he could but he didn’t today.

“The plan was to jump and make the running but two or three of them wanted to do that. The pace then dropped so I decided to come around them and just keep it even.

“My horse didn’t want an end to end gallop. He needed that run and he’ll improve plenty.

“I think running hard at a mile is his trip. He has loads of speed but has class enough to win at that trip.”

The Stewards interviewed J.A. Heffernan, rider of Order Of Australia, concerning his use of the whip in the latter stages of this race. Evidence was heard from the rider concerned. In his evidence he stated that his mount had lost a near fore shoe at the start of this race and was leaning to the right throughout. He advised the Stewards that this animal is not a straight forward ride and the whip was used a number of times for corrective purposes. Having viewed a recording of the race and considered the evidence the Stewards were satisfied that some use of the whip was for corrective purposes and therefore did not find J.A. Heffernan in breach of R10(3). Mr. P. Law absented himself from this enquiry.