Orr moves level with Slattery in race to be champion apprentice 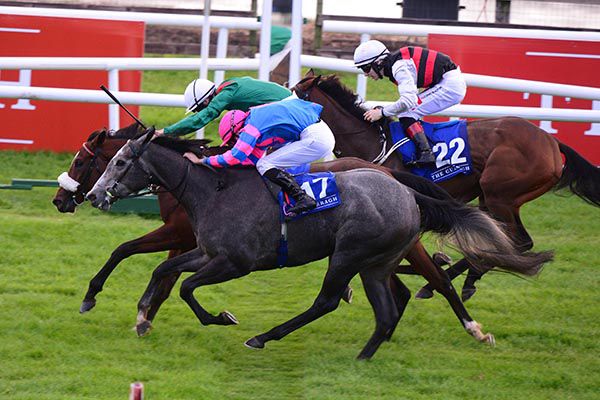 Oisin Orr moved level with Andrew Slattery (36 winners apiece) at the head of the apprentice table when winning the Irish Stallion Farms EBF Median Auction Maiden at the Curragh on Katiba.

The 2017 champion apprentice got newcomer Katiba (12s into 6s) home by a head and half a length from fellow first-timers Gin Blossom and Persian Queen.

Gin Blossom really stormed home under Donnacha O’Brien but as it happened it was a measure of compensation attained for successful owner and trainer, the Aga Khan and Dermot Weld.

They had seen their Shekhem lose out by a neck in the Group Two Beresford Stakes half-an-hour earlier.

“It was a good performance first time out in a big field. We might leave it at that for the year or if we do run again it could be in the Eyrefield," said Weld.

“She’s a big, big filly and one to look forward to next year.

“Shekhem ran a cracker in the Beresford, he always does. He got beaten a neck in Galway and was beaten a neck again today. He tries so hard.

“He’s a good colt and there is improvement in him. He’s still immature and he’ll make a real good three-year-old. Ground really doesn’t matter to him.

“He has that will to win, guts and courage.”

L.F. Roche, rider of Now The King trained by M.D. O'Callaghan, reported to the Clerk of Scales that his mount did not handle the ground.

Willie Mullins' Robinnia rewarded those that played the 1/2 odds in the mares' maiden hurdle at Punchestown.

Egan delighted to be reunited with Mishriff

David Egan is looking forward to renewing his partnership with Mishriff in next month’s Qipco Champion Stakes — after missing the colt’s two big wins in France this year.