Panstarr puts it all in for Manning 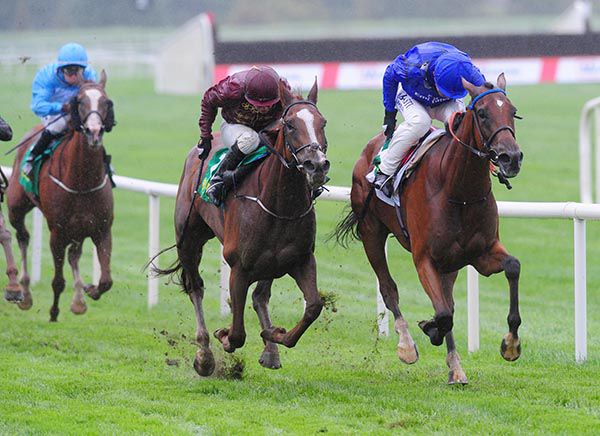 The 8/1 shot tracked Curly before racing past her as she weakened at the three pole.

She led the field as they headed for home but Ship Of Dreams threw down the gauntlet approaching the final furlong.

Ship Of Dreams closed inside the final furlong but couldn't get past Panstarr who battled to the line by a neck.

The runner-up was also an 8/1 chance. The pair were four and a half lengths clear of Hence (11/2) at the end of nine furlongs.

Ger Flynn, travelling head lad, said: "She is a very versatile four-year-old filly and is now a Group Three and Listed winner. She likes the soft ground and goes on good and is one hopefully we may keep in training next year.

"It was good to get the win with her and Kevin was fantastic on her; the draw was key and he was very positive from the get-go and strong and an unbelievable drive to the line to get her to win."

Tullybeg another for Codd as Elliott doubles-up

Jamie Codd made it three winners from his last three rides, as he guided Tullybeg to victory in the bumper at Bellewstown, the McLoughlin Oil INH Flat Race.

Outsiders dominated in the feature at Bellewstown this afternoon, the Fast Shipping Bellewstown Handicap Hurdle, with 22/1 chance Ardamir just holding off the late surge of Zoffalee (50/1).

Art Power made it four wins in-a-row as he impressively dismissed his seven rivals in the Group 3 Coolmore Sioux Nation Lacken Stakes.