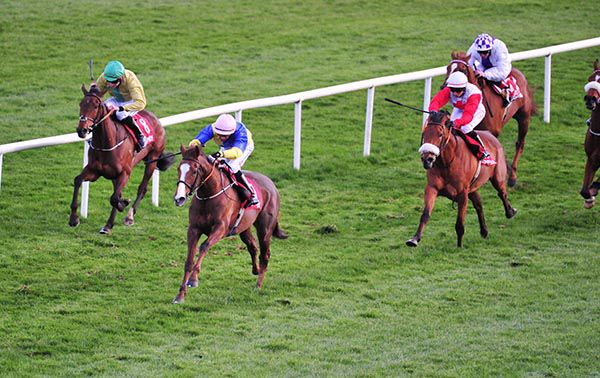 Kells County Kilkenny native Alan Persse put a home win on the board on 25/1 shot Aunty Audrey in the first split of the @GowranPark1 Handicap.

An initial win at the venue for Persse, for the successful Zoffany mare it was actually win number three at the picturesque course.

Persse eased down prematurely and in the end he had only a neck to spare on the Pat Flynn-trained seven-year-old.

“Got a little fright coming near the line — she had plenty left anyway. I couldn’t hear nothing coming — it wouldn’t have been a nice situation to explain so thankfully luck was on our side,” reflected Persse.

He added: “It’s good to get a winner for Pat as he’s been loyal to me since I’ve gone down there over a year ago. He’s given me plenty of opportunities — it’s nice to ride a winner for him.”

Sam Ewing, rider of Kalanoura trained by Gavin Cromwell, reported to the Clerk of Scales that his mount hung left up the straight.

W.T. Byrne, rider of Talsara trained by Patrick T. Foley, reported to the Clerk of Scales that his mount hung badly.

At the request of the Stewards, B.M. Coen, rider of Storm Steps, trained by Timothy Doyle, reported to the Stewards' Secretaries that his mount never travelled.