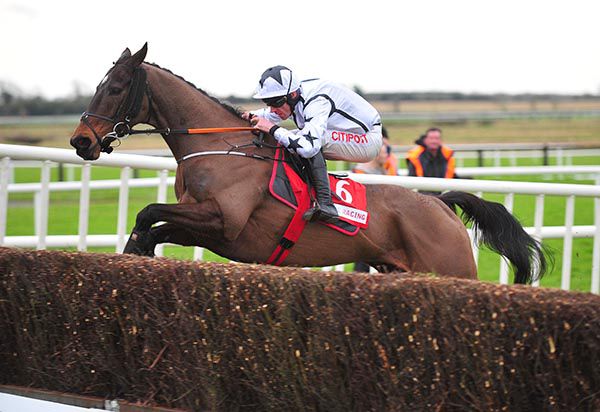 Doctor Phoenix powered clear in the closing stages to run out a comprehensive winner of the €100,000 Bar One Racing Dan Moore Memorial Handicap Chase at Fairyhouse.

Kilcarry Bridge posted a brave front-running effort in the two-mile one-furlong contest but had no answer when tackled by Gordon Elliott's charge going to the final fence.

The 13/2 shot, ridden by Davy Russell, was held up in the early stages before being asked to take closer order turning for home.

Having claimed the front-runner before the last he streaked away on the run-in to post a nine-length winning margin.

Acapella Bourgeois was sent off the 9/10 favourite (from 2/1 in morning) but again proved disappointing. He weakened turning for home and pulled up after a slow jump two out.

The winner, owned by the Nick Bradley Racing Club, was bouncing back to form having finished well beaten here last month when he made a bad mistake mid-race.

“Jack (Kennedy) did the right thing the last day as he let him hack home after making a bad mistake,” said Elliott.

“He only cost ten grand so if he never wins another race its job done.

“He’s a two miler and he loved coming off a fast gallop. If you don’t bully him early he’ll arrive on.

“Nick (Bradley) is ballsy enough with his entries (entered in the Queen Mother Champion Chase) but if it’s up to me we would be looking at a little conditions race.”

It was a double on card for Elliott and Russell following the earlier victory of Mitchouka.

Paul Townend later reported later Acapella Bourgeois burst a blood vessel. This was confirmed by the vet who stated that the gelding had blood on the nose as a result of exercise induced pulmonary haemorrhage.