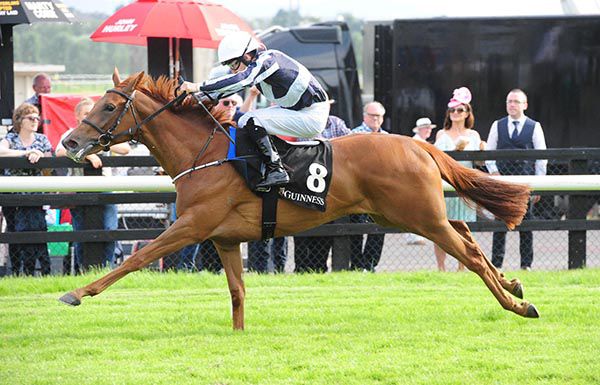 Alpine Star
© Photo Healy Racing
Jessica Harrington will take her time in planning the next step for her French Oaks runner-up Alpine Star.

The three-year-old filly was beaten only a short neck when contesting the Group One contest, otherwise known as the Prix de Diane, at Chantilly on Sunday.

Piloted by Stephane Pasquier, the daughter of Sea The Moon made all of the running and was joined only in the final two furlongs when Donnacha O’Brien’s Fancy Blue surged forwards to prevail on the line.

“She ran very well, she won everywhere but on the line!” Harrington said of the performance.

“She ran an absolutely brilliant race and I was delighted with her, we all were.”

Harrington now has no fixed plans for the chestnut, who will be given time to rest after a successful early campaign that began with a comfortable victory in the Coronation Stakes at Royal Ascot.

That result came over a trip of a mile, whereas Alpine Star’s performance over an extended 10 furlongs at Chantilly confirmed that she is not lacking in stamina.

“She obviously stays a mile and a quarter, she’ll probably get a mile and a half in time. I think she’s a very special filly,” Harrington said.

“I’m not sure (what trip she will run over next). I’ll have to have a chat to the owners and we’ll see.

“We’ve no immediate plans, we’ll just let her settle. She’s had two quick races and a hard race yesterday, so we’ll give her a bit of time now.”