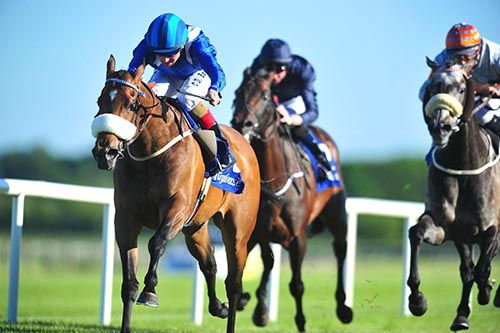 The Irish Stallion Farms EBF Cooley Fillies Stakes is the feature at Dundalk on Friday and English raider Don't Be faces eight rivals in this mile Listed event.

The Sir Mark Prescott-trained mare has recorded seven career wins to-date, notably a career highlight at Goodwood back in May, although she carries a 3lb penalty here for that Listed success.

However, the daughter of Cape Cross has been a shade disappointing since, including when soundly beaten at San Siro last month and Kevin Prendergast's Tamadhor will provide a stern test.

Back On Top has shown progressive form recently in handicaps but seems best suited by seven furlongs, while the Ballydoyle representative Facade has been absent since showing promise in back-end maidens last season.

Michael Halford saddled two juvenile winners as part of a treble here on Wednesday evening and could add to his tally with Kalidabad in the Irish Stallion Farms EBF Median Auction Maiden.

The Holy Roman Emperor colt showed improved form when switched to the Polytrack here last month and probably has most to fear from Power Struggle.

Skerries trainer Karl Thornton is enjoying a fruitful spell at present with chaser Colms Dream and Hatch Hall and the latter could complete a hat-trick as he makes a quick reappearance in the Irishinjuredjockeys.com Handicap.

The four-year-old gelding, who has won a maiden hurdle at Cork and a mile and a half handicap here on Wednesday, teams up again with Colin Keane and if in similar form, can defy a 5lb penalty.

This extended 10-furlong event should prove a lively betting heat to close proceedings as recent course and distance winners Honor Oak and Mademoiselle Penny are also in the line-up.