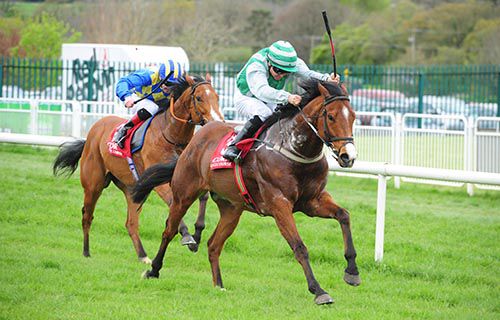 Primo Uomo made it three wins on the bounce, as he ran out a good winner of the Cork Racecourse Handicap.

The Ger O'Leary trained five-year-old rounded off last season with a win at the Curragh in October, and started where he left off by winning on his seasonal debut at Dundalk in March.

Settled behind the leaders today by Niall McCullagh, he travelled best from the two furlong pole and improved to lead with over a furlong to race, staying on well from there to score by two and a quarter lengths.

Sors (4/1) finished second under Declan McDonogh for Andy Slattery, while Peticoatgovernment (5/1) was another two and three parts of a length back in third with Billy Lee in the saddle for Willie McCreery.

Imagine If was sent off the 3/1 favourite, and finished fifth under Colin Keane for Ger Lyons.

Ger O'Leary said afterwards: "Before racing, I thought the ground would be a bit dead but my goodness, it was never in doubt!

"Niall (McCullagh) said he is a horse who could go all the way and was delighted with him. There's a Listed race at Navan next week for him - he'd get six (furlongs) but is special over five and that's his trip."