Princess beats the boys under Orr for Love 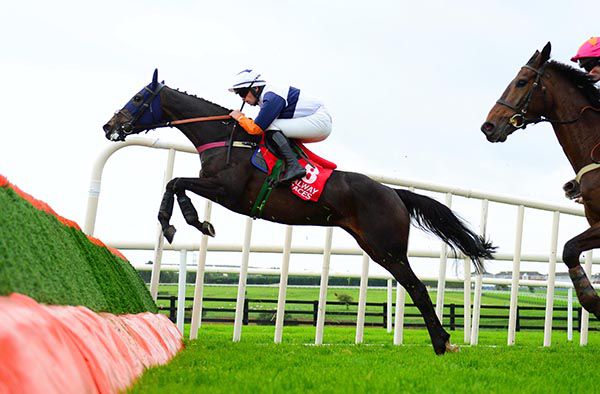 Three time point-to-point winner Presentingprincess made the breakthrough on her sixth start over flights, as she took the galwayraces.com Maiden Hurdle.

Also successful in a bumper at Limerick in July, the Dot Love trained seven-year-old went down by just a neck and short head on her most recent outing at Listowel.

Available at 9/1 in early shows, the Presenting brown opened on-course at 7/1, before going off an 11/2 chance against her seven gelding rivals.

Settled in second, she improved to the front two out, and kept on well under pressure from the last, going on to score by a length and a half under Conor Orr.

Ozzie's Way (9/1) finished second under Denis Hogan, while Kaatskill Nap (6/4 in early shows, returned at 3/1) was a nose back in third.

The Willie Mullins trained latter made a mistake at the second last, and that may have cost him the race.

Batcio was sent off a well-backed 6/4 favourite (7/2 in early shows), and he finished a disappointing fourth, fading from two out after attempting to make all.

Ciaran Murphy, assistant trainer to Dot Love, said: "We were obviously worried about coming from Listowel so quick but it was a nice opportunity for her today and she took it well.

"She stays well, loves the test of stamina, and the juice in the ground. She is very genuine and we have a bumper and hurdle won now so the pressure is off.

"She wants three miles plus and down the road over fences there may be a nice opportunity for her."

* The Irish Horseracing Regulatory Board Veterinary Officer reported to the Stewards that Knocknarae King trained by Brian M. McMahon was found to have an exercise-induced pulmonary haemorrhage post race.

* Mr E. Mahon, rider of Knocknarae King trained by Brian M. McMahon, reported to the Clerk of Scales that his mount burst.

A big field went to post for the juvenile maiden in the Curragh, but the market principals dominated as Van Gogh saw off Colour Sergeant.

Gosden has Breeders' Cup in mind for Fanny Logan

John Gosden has not ruled out sending Fanny Logan back to America for a second shot at glory in the Breeders’ Cup Maker’s Mark Filly & Mare Turf.

Paul Hanagan has celebrated bigger winners than Majestic Dawn’s success in the bet365 Cambridgeshire, but few victories will have provided greater satisfaction given the year he has endured.