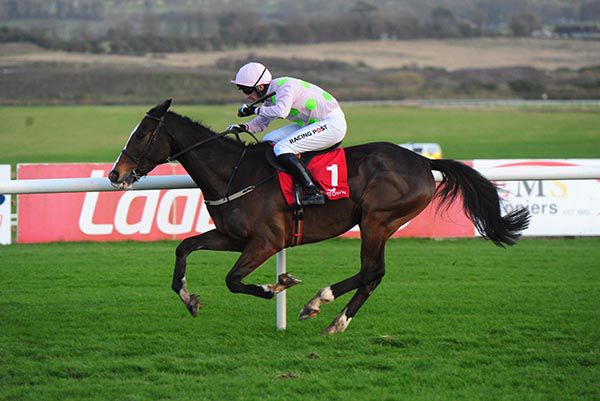 There was a second Susannah and Rich Ricci winner on the day, but more significantly a 114/1 plus Punchestown treble for Willie Mullins as point-to-point scorer Aione graduated successfully to the track in the Irish Stallion Farms EBF Auction INH Flat Race.

Patrick Mullins was in the plate on this six-year-old, appearing for the first time since winning a Dromahane point for Donnchadh Doyle 919 days back.

Aione here made most of the running to beat the promising The Road To Fame by three lengths.

“That’s a real nice horse, a chasing type, who had training difficulties last year and we gave him the season off," said Willie Mullins.

“He will probably go hurdling now as I want to get him jumping fences next year. He gallops and jumps at home. He has a lovely long stride and will be in the staying division.

“We’ll probably look for a hurdle after Christmas and we’ll see how good he does that.

“Patrick felt he needed that run as well. He took a good blow half a mile out. He’s one to look forward to.”

The earlier Closutton winners on this card were ridden by Mullins' nephew Danny, Drury and Salsaretta.

The Stewards interviewed Mr. D. O'Connor, rider of The Road To Fame, concerning his use of the whip in the closing stages of this race. Evidence was heard from the rider concerned. Having viewed a recording of the race and considered the evidence, the Stewards were satisfied that Mr. D. O'Connor was in breach of Regulation 10.3(g)(frequency) and having considered his record, they cautioned him on this occasion.