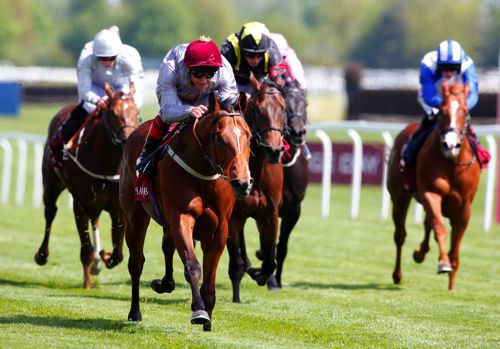 We got a brief taste of the 2020 Flat turf season at Naas on Monday and three first season sires were represented in the opening maiden.

The obvious hope would be that we’ll see more of the freshmen sires progeny, sooner rather than later.

Mick Mulvany’s charge was half a length and four and a quarter lengths behind a smart looking duo up front, Jim Bolger’s Poetic Flare, and Ballydoyle’s Lipizzaner.

The Blue Panther, bred by Tinnakill Bloodstock and Jack Cantillon, showed plenty of pace, always to the fore and getting on terms a furlong and a half out.

He was only headed under a furlong out and the juvenile looks good value for his 4,000 Euro yearling price.

Boasting (by Ballyhane Stud’s Prince Of Lir) also showed speed before fading inside the final furlong to end up in fifth place.

A bay horse, 2014, by Kodiac, out of Esuvia, by Whipper, Prince Of Lir won two races at two, including the five furlong Group Two Norfolk Stakes at Royal Ascot. He was retired to stud in 2017 and stands at Ballyhane for 4,000 Euro.

Marketta, a filly by Markaz, finished at the back of the field.

Markaz was retired to Derrinstown Stud in 2017 and the Dark Angel horse stands at a fee of 5,000 Euro.

Racebets.com has a leading first-season sire 2020 (number of individual winners UK and Ireland March 23rd to the end of Turf Season UK and Ireland 2020) market.