Rock Road off to a winning start for Mullins 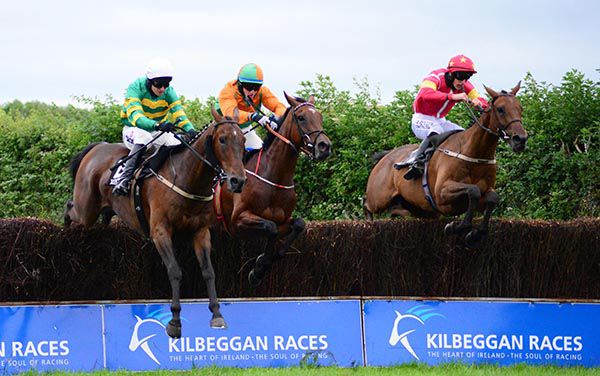 Off bottom weight and having his first start for Willie Mullins, 4/1 favourite Rock Road came through after the final fence to take the Follow Kilbeggan On Facebook Handicap Chase.

Regular partner Brian Hayes gave his mount a patient and confident ride, and Rock Road in the end recorded a two and a half length verdict over Thecraicisninety, who ran a cracker trying to give 26lbs to the winner.

Bred by the Bowes out of their good mare Sweet Kiln (the winner of ten races), the Definite Article gelding had only a Fairyhouse maiden hurdle win to his name from 24 starts for Michael Bowe, but could be the type to keep going the right way for his new connections.

Assistant trainer Patrick Mullins said: “It's great for Brian who had to lose an awful lot of weight to ride him (at 9st 12lbs).

“Michael Bowe recommended him to us, he was looking to move him on and thought he might do a job and he was right.

“Maite who looks after him has done a lot of work with him and he seems happy out.

“I think he could win over hurdles as well.”