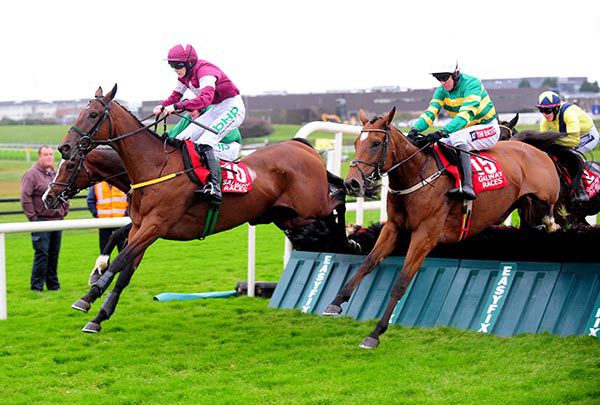 Sancta Simona, near side, moves into contention at the last
© Photo Healy Racing

Sancta Simona made a good start to her hurdling career with victory in the opening maiden hurdle at Galway for Willie Mullins.

Barry Geraghty, in the JP McManus silks, tacked her onto the front group of four horses approaching the second-last flight.

She then made good headway between horses to get on terms with Momus and Diamond Hill and readily assumed the lead on the run-in.

Geraghty could afford a peek over his left shoulder as his mount strode home by a comfortable length and a half at 5/2.

Bakmaj, the 2/1 favourite, kept on for second with Momus a further three and a quarter lengths adrift in third at 8/1.

JP McManus' racing manager Frank Berry said: “That was good. She learnt as she went along as she was a bit novicey early on.

“Barry said they went a good gallop and she did it well.

“I don't know what happened her in Listowel, whether it was the ground or what it was, but she disappointed for some reason.

“It's nice to see her jumping hurdles and there are plenty of those mares' races for her to go out in down the road.”

Sancta Simona had form figures of 213 in her three bumpers with the win coming by 11 lengths at Kilbeggan in May.