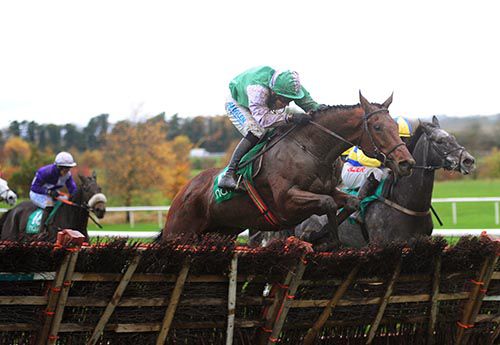 Ancient Sands will bid to land another big pot at Killarney as he lines up in the feature on Thursday afternoon, the Killarney Grand Live Music Venue Handicap Hurdle.

Successful in a Grade B contest over the course and distance in May, the John Kiely-trained eight-year-old has since finished a good third at Punchestown on his most recent start.

He went up a total of 8lb for his last two runs, but he can still be expected to give a good account of himself in this ultra-competitive heat.

Time For Mabel was second to Ancient Sands over course and distance in May, and he will bid to get his revenge now.

The Edward O'Grady-trained gelding was last seen winning at Limerick and he is sure to have plenty of supporters here.

Winter Lion won a similar contest at Bellewstown on his last start and is a leading contender, while top-weight Cliff House, the John Ryan-trained Bitview Colin and the Ruby Walsh-ridden Queen Alphabet are others to consider.

Walsh teams up with his boss Willie Mullins for the ride on Penhill in the opening Larkins Pub & Restaurant Milltown Novice Hurdle.

A five-time winner on the level when trained in the UK, this son of Mount Nelson impressed when winning on his debut over hurdles at Tramore in May.

He takes on seven rivals in this two-mile-one contest, with five of them coming into this race off the back of a win.

Walsh and Mullins again team up in the Europe Hotel & Resort Handicap Hurdle.

The tricky King's Wharf is their representative, and he should give a good account of himself in a race of this standard.

Sizing Alberta, Ballyadam Brook, Hatch Hall and A Decent Excuse are a few for the shortlist in the Dawn Omega Milk Handicap Hurdle, while Phil's Magic, The Plan Man and Buster Dan Dan are the stand-out names in the Dawn Hi Lo Milk Beginners Chase.

The Dawn Milk Run Handicap Chase is a weak affair and Galboystown Lady might be able to take it, while Derek O'Connor is a significant jockey booking for Innocent Verdict in the concluding Christy Lucey Transport Ltd Flat Race.