Second warms up for National with Naas success 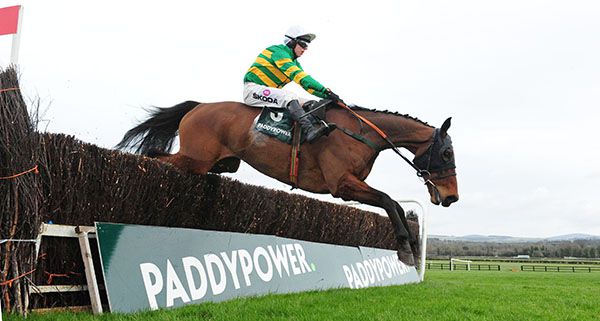 Any Second Now justified good support in the opening Grade 3 Chase at Naas this afternoon when running out a game winner.

Ted Walsh's charge was taking a significant drop in trip today and was backed from as big as 14/1 in the morning into 3/1.

He travelled sweetly throughout for Mark Walsh and hit the front going to the second last in the two-mile contest.

The JP McManus-owned gelding reached for the last but responded well when pressed by 5/2 favourite Articulum on the run-in to hold that rival at bay for a length-and-a-quarter win.

The winner, who landed the three-mile-two Kim Muir at Cheltenham last season, is all set now for a tilt at the Aintree Grand National with the winning trainer saying:-

“He travelled well and jumped well and if he runs as well as Seabass (who won this race before finishing third in the 2012 Grand National) I’ll be delighted.

“He was nicely treated with 11st1lb on his back. The only fence he reached for was the last and Mark was delighted with him.

"It’s a good prep for Aintree. Whether he’s good enough or not only time will tell. He’s going there in a good frame of mind and he gets the trip. If you’re not in you can’t win!

“He won a Grade 2 hurdle at Punchestown as a novice. He’s a classy enough horse and the soft ground suited him as well.”

Race sponsors Paddy Power shorted the winner into 12/1 fro 16/1 for the Grand National.