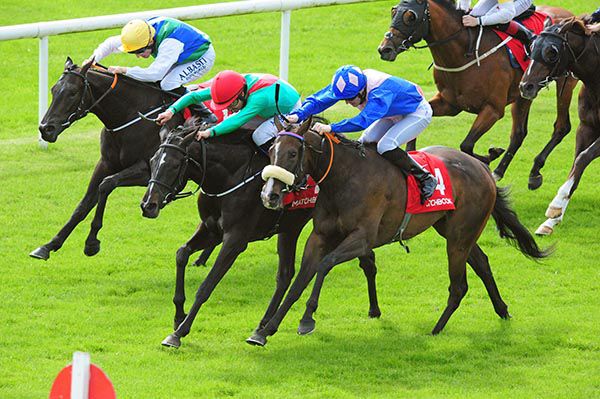 Silence Please made it two from two as she got up close home to land the Matchbook Straight Seven Irish EBF Premier Nursery Handicap.

A winner on debut at Gowran in July, the Jessica Harrington trained daughter of Gleneagles was sent off the 5/2 second choice of punters this afternoon.

Running for the first time in the colours of Team Valor and Gary Barber, the Shane Foley ridden victor raced just behind the leaders on the near side.

She was ridden and looked in trouble over a furlong from home, but battled on gamely under pressure in the closing stages, getting up to prevail by a neck.

Windham Belle, who made up good ground from rear, was the one just denied, with Billy Lee aboard this 20/1 chance for Willie McCreery.

Ampeson ran a fine race to take third, another three parts of a length back, while the easy to back Royal County Down (9/4f from 15/8) could only manage a disappointing fifth.

"I'm delighted with that because she's the first horse I've had for Team Valor, so that was kind of important," said Harrington.

"Shane said she was as green as grass and probably needs a mile. She's going to be a nice staying filly for next year.

"I had nowhere to go with her and the handicapper gave me a fair weight and she got the job done in the end.

"Nothing helped her as was drawn seven, out on her own, and she doesn't know enough to race out there on her own.

"Shane said she picked up great when he gave her a couple of smacks and the horses came either side of her, that helped her a lot.

"She wanted to win and she's very game. She needs to go a mile.

"She's in the Moyglare and she might go there. She's a nice filly and she'll come on a ton from that so we'll see where they want to go."

* The Stewards interviewed S. Foley, rider of Silence Please, concerning his use of the whip in the closing stages of this race. Evidence was heard from the rider concerned. Having viewed a recording of the race and considered the evidence, the Stewards were satisfied that one strike with the whip was for correctional purposes and the rider was therefore not in breach of Regulation 10.

* The Stewards enquired into an incident in the closing stages of this race involving Royal County Down, ridden by D. O'Brien, placed fifth, Silence Please, ridden by S. Foley, placed first, Marchons Ensemble (GB), ridden by C.T. Keane, placed sixth, Mythologic, ridden by W.M. Lordan, placed fourth and Ampeson (GB), ridden by C.D. Hayes, placed third, where it appeared that Silence Please drifted right causing Mythologic to check and Ampeson drifted left causing Royal County Down to check. Evidence was heard from the riders concerned. Having viewed the recording of the race and considered the evidence, the Stewards were of the opinion that any interference was unintentional in and therefore took no further action. Mr. E. Irwin, Acting Steward, absented himself from this enquiry.