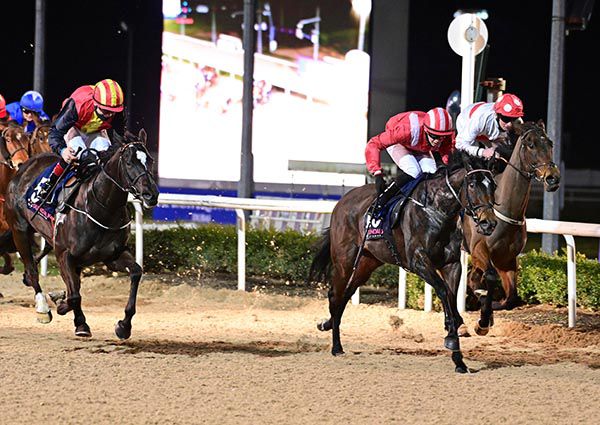 Shane Crosse rode Tyrconnell, and it was Dylan Browne McMonagle that did the steering on Sister Lola, who got in as a reserve.

Eighth two furlongs out, the Lynam home-bred was pushed along and made progress a furlong and a half out.

Ridden to lead under a furlong out, Sister Lola stayed on well, strongly pressed close home to hold Sideshow Bob by a neck.

Above Us Only Sky finished well for third, half a length back.

“It was a bit disappointing last week. As you can see with the sweat of her there she can be very hard on herself,” said Lynam.

“We got a call that we were getting in today, I didn't think we would. I rolled the dice and got lucky. I took the 5lb off her to give her every chance and it worked out.

“It's been a nice day for us, two winners, one for Sarah and one for me.

“We always thought she wanted a mile but I think we've been wrong as her two seconds and her win have been over seven.

“I was worried when I saw the sweat of her down behind the stalls but it worked out.

“We bred her as well and the sire has been good to me.”