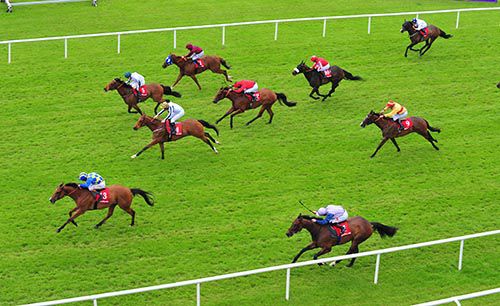 20/1 shot Sors emerged on top after wide open dash for the Tote Rockingham Handicap at the Curragh.

The field spread across the track in the five-furlong contest with Killian Leonard electing to come up the centre on Sors.

Andy Slattery's charge got his head in front inside the final furlong and he kept on well in the closing stages for a length-and-three-quarters victory over 4/1 favourite Kimberella.

The winner had also struck over course and distance early last month and was continuing a fine season for the Thurles handler.

"I told anyone that would listen that he would win. We had been holding him up over six and he was getting sick of it. He needs to pop out and go over five,” said Slattery.

"It's faster he seems to be getting. He had a good draw and a light weight, and Killian's claim made up for being out of the handicap."

Slattery also had news of juvenile Branch Line, who impressed when winning on his debut at Roscommon just under two weeks ago.

"The plan is to run him in the Listed El Gran Senor Stakes at Tipperary on August 5th as long as he's fit and healthy.

"There have been a number of offers for him since he won at Roscommon but nobody has offered what we think he's worth."