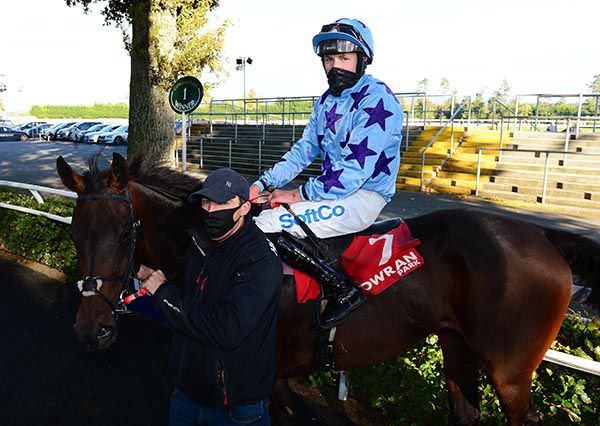 Streets Of Doyen
© Photo Healy Racing
They went steady enough in the INH Stallion Farms EBF Novice Hurdle and the principals were really flying over the last couple of flights.

It was all to play for down to the last with long-time leader Friary Rock hanging in there as 6/4 favourite Streets Of Doyen challenged on his outer.

Phillip Enright really asked Friary Rock for a long one but his mount came down and that left the market leader to come home a length and a half in front of Jackson’s Gold (16/1).

The very progressive Simon Torrens-ridden winner was completing a hat-trick of wins over three miles having previously won at Roscommon and Gowran.

Winning trainer John McConnell said: "He is a nice horse and has just taken time to come to himself.

"He has learned how to race now but doesn't do much unless he is asked and Philip (Enright, on Friary Rock) rode a lovely race there from the front and it didn't suit our lad but I think we had the better of him at the last.

"You could see coming up to the line he wasn't doing a whole lot in front either.

"He has a big engine and is exciting and likes good ground so I might put him away. He could be a Pertemps (Final) type horse in time and there's also the three mile handicap at Fairyhouse in Easter too. Not too many win three in a row.

"Simon (Torrens) is riding unbelievably and is worth his 5lbs claim all day long so I'm using him a good bit."