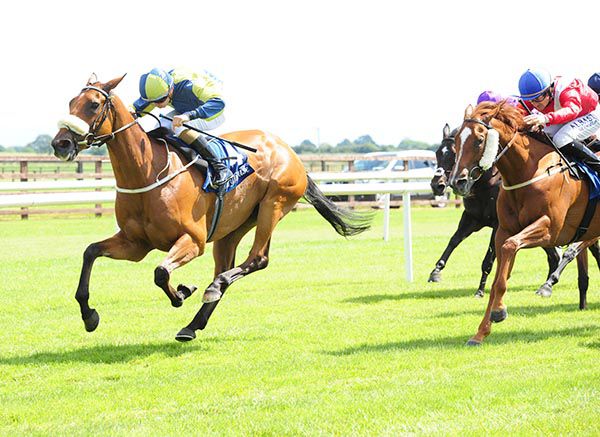 Michael Halford is confident Surrounding has plenty going for her as she makes another bid for Group Two honours in the Balanchine at Meydan.

The mare was found to be in season when disappointing behind Magic Lily in the Cape Verdi in January, but she ran much better when a close fourth from a poor draw in a mile handicap there two weeks ago.

Halford reports the seven-year-old to be all the better for that run, and was pleased to find she is better drawn in stall one on Thursday.

“She’s in good form — I’d draw a line through her first run out here,” said the County Kildare trainer.

“She was in season — and her second run was very good, given her wide draw.

“She’s back taking on fillies again and she’s got a good draw. On ratings, it’s quite tight.

“I’m looking forward to seeing a much-improved run from her — from her first day, anyway. She’s been training really well.”

Charlie Appleby was delighted Magic Lily put her well-documented problems behind her when getting up in the last stride to deny Nisreen by a short head in the Cape Verdi over a mile.

“Magic Lily has come forward for that run,” he said.

“Obviously a step up in trip will hopefully see a bit more improvement again there. She has the (3lb) penalty this time around, and we’ll take that into account when taking on (Nisreen) — who she just got in front of last out.”

Appleby warned not to discount his other runner Divine Image, who has not raced since disappointing on soft ground at Deauville in August.

“Her home work has been good, and we’re pleased with how she looks,” he said.

“She’s fit and ready. All of her starts, apart from her run on the soft ground at Deauville, have been on the Meydan dirt or the one start on the synthetic in the UK.

“If she brings that form back from last year at Meydan, she’s going to be a player.”

Capezzano makes his first first appearance in the Group Three Firebreak Stakes since finishing last of 12 behind Thunder Snow when favourite for the Dubai World Cup.

He had beaten that horse by nine and a half lengths just three weeks earlier -but he had a total of four races in that winter campaign, prompting trainer Salem bin Ghadayer to bring him into training later this time round.

“I delayed this horse and didn’t use him at all in training until the end of September,” said Bin Ghadayer.

“He’s a Bernardini, is always keen, and I made a programme for him that is just February and March to keep his big performances saved for the big nights.

“At the end of the day, he was invited to (the Group 1 $20 million) Saudi Cup, and it’s only two weeks until that race. But he will need the race, and I think the two weeks is enough time for recover.

“I think he can be 100 per cent for Saudi and then Dubai World Cup, but this race will not be an easy race.

“We will go and try to win this race, but we must be very careful with him and his mentality. We have tried to keep him happy and relaxed, which is not easy, but he has trained and galloped well — and he’s healthy and sound.

“Last year, he ran in a mile handicap and won just two weeks before he won Round Three.”

Bin Ghadayer also runs the veteran Heavy Metal and Matterhorn, who is having his first start since leaving Mark Johnston’s stable.

Last year’s winner Muntazah, trained by Doug Watson, is another among the 10 runners.

Quick double for Howard as Winter Escape bounces back to form

The McManus colours were to the fore at Listowel on Friday with Drop The Anchor and Minella Times landing valuable prizes, and the green and gold were to the fore again in the Charlie Chute Memorial Handicap Chase as Winter Escape (11/4 joint fav) won well in the hands of Mark Walsh.

Ventura Rebel comes back to the boil in Renaissance

Ventura Rebel returned to form when landing the Qatar Racing And Equestrian Club Renaisance Stakes at the Curragh.

There were plenty of horses looking for room entering the final quarter mile of the Tipperary Crystal Ladies Trophy Handicap including eventual winner El Tren (9/1).

Aidan O’Brien’s domination of the Alan Smurfit Memorial Beresford Stakes continued at the Curragh this afternoon as the master of Ballydoyle saddled his twentieth winner of the Group 2 with High Definition.