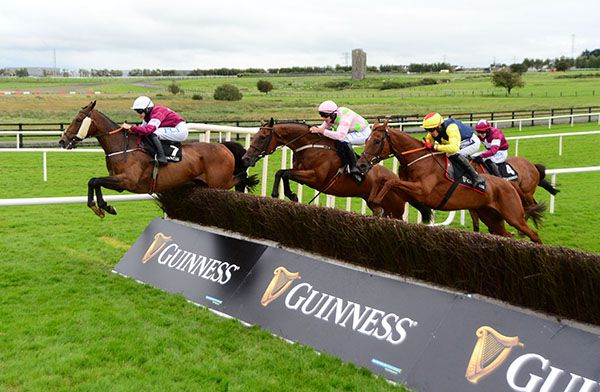 The Storyteller, near side, moves into contention
© Photo Healy Racing

The Storyteller, who was pulled up in the Galway Plate on Wednesday, bounced back to winning ways in the Arthur Guinness Chase over an extended two miles six at Galway.

Mistakes at the first three fences did for him in the Plate but it was a different 'story' today.

He readily shot past Sub Lieutenant after the last and soon set about the long run for home under Keith Donoghue.

With two furlongs to gallop, he took a few lengths out of Sub Lieutenant and the race was soon over.

The nine-year-old gelding strode right away to land the spoils by nine and a half lengths at 10/3. Sub Lieutenant kept trying in second at 9/1.

Livelovelaugh, the 3/1 favourite, finished out of the places in third beaten 17 lengths by the victor.

Assistant trainer Ian Amond said: "The other day (Galway Plate) was obviously the plan but it went a bit pear-shaped. Davy (Russell, jockey then) did the right thing and looked after him as he'd never have got back into it after what he did at the first few fences.

"He did it easy there and it paid off. He is a great horse and everywhere he turns up he never lets you down."